This is a printer version of an UnderwaterTimes.com article.
To view the article online, visit: http://www.underwatertimes.com/news.php?article_id=06471082315 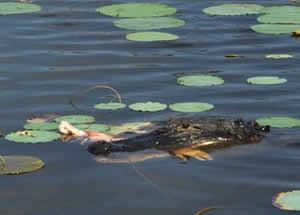 The beast with the snorkeler's arm. Photo: Jerome Bien

Bill Hedden being attended to after the alligator attack. Photo: Jerome Bien 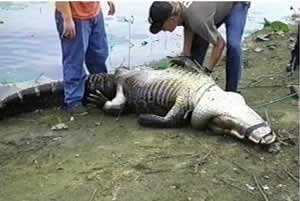 CHARLESTON, South Carolina -- A man is hospitalized in Charleston after an alligator bit off one of his arms at a Lake Moultrie recreation area.

Bill Hedden, 59, is being treated at the Medical University of South Carolina hospital. Hedden's family has told the hospital not to release any information about his condition.

Hedden was snorkeling in a Lake Moultrie recreation area when the gator attacked him about 3:45 p.m. Sunday.

Hedden stumbled into a party of picnickers with his arm missing and blood gushing from his wound.

Five nurses were among those at the gathering and put ice on his wound and kept him awake until paramedics could arrive.

Bill Salisbury with the Berkeley County Rescue Squad said Hedden's arm was retrieved from the belly of the alligator Sunday after wildlife officers shot it. The arm was taken to the hospital and doctors were studying whether it could be reattached.

The alligator was nearly 12 feet long and weighed about 550 pounds.

Although they are generally found in freshwater, alligators sometimes venture into brackish salt water.