This is a printer version of an UnderwaterTimes.com article.
To view the article online, visit: http://www.underwatertimes.com/news.php?article_id=06104178352 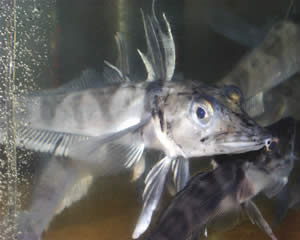 Photo of the icefish Chionodraco hamatus by H. William Detrich.

BOSTON, Massachusetts -- Biologists face the major challenge of understanding genetic and environmental risk factors underlying human diseases. Surprisingly, animal species in the wild have sometimes acquired the characteristics of a human disease through evolution. Yet, the ‘disease’ trait is precisely what allows them to flourish in their natural environment. Trends in Genetics features a new study co-authored by Dr. William Detrich, professor of biochemistry and marine biology in the Department of Biology at Northeastern University, which argues that these “evolutionary mutant models” are likely to hold important clues for understanding, and eventually treating, human diseases.

Detrich and Trends in Genetics co-authors R. Craig Albertson of Syracuse University, John Postlethwait of the University of Oregon, and Pam Yelick of Tufts University have just received a joint $2.48 million, five-year award from the National Institutes of Health (NIH) to study mineralization of the icefish skeleton as a model for osteopenia (low bone density) and osteoporosis (the disease that results from osteopenia). Theirs is a fresh approach to learning how the regulation of bone calcification can lead to osteoporosis in the elderly.

“There is a growing recognition among biologists that organisms that live in novel environments have evolved certain characteristics that work well for them but would cause disease in humans,” said Detrich. “There is a lot that evolution and adaptation can tell us about the human condition. Oddball creatures, such as cavefish that lack eyes, giraffes with high blood pressure, and Antarctic fishes, provide powerful research systems that complement the more traditional models of human disease, like the mouse.”

Through the replacement of bone by connective tissue and decreased mineralization of the skeleton as a whole, many Antarctic fish species have evolved reduced bone density. This adaptation increases their buoyancy in water, a characteristic that enables them to move easily in the water column for feeding. This adaptive trait clearly mimics the detrimental human condition osteopenia, a reduction in bone mineral density that affects 34 million American women and 12 million American men.

Osteopenia can lead to osteoporosis, a disease characterized by low bone mass, bone deterioration and fragility, and increased susceptibility to and slow healing of fractured bones. The authors propose that the type and mode of action of adaptive mutations favored by natural selection in wild populations—such as low bone density for increased buoyancy in Antarctic fishes—are similar to those that contribute to human diseases like osteoporosis. Studies in evolutionary mutant models have the potential to identify presently unknown genes and gene/environment interactions that affect human health and underlie human disease.

A subset of Antarctic fishes, the icefishes, too, have acquired the characteristics of human disease. Icefishes do not make hemoglobin, the oxygen-transporting protein of all other vertebrates, or produce red blood cells: they are profoundly anemic. Nevertheless, icefishes survive and thrive in oxygen-rich cold waters surrounding Antarctica. In humans, anemia (reduced numbers of circulating red blood cells) is deleterious because it greatly reduces delivery of oxygen to the body tissues. Patients undergoing kidney dialysis or chemotherapy often suffer from anemia.

Work from Detrich’s laboratory on the icefishes has already revealed novel genes involved in red cell formation that might be developed as new targets for anemia treatments, providing further support for the potential large role that studies of evolutionary mutant models can play in improving human health.