This is a printer version of an UnderwaterTimes.com article.
To view the article online, visit: http://www.underwatertimes.com/news.php?article_id=04762101938 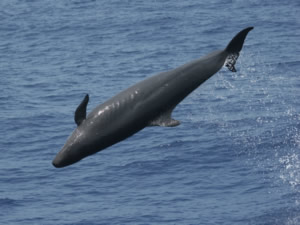 HONOLULU, Hawaii -- Seeking an end to the continuing slaughter of false killer whales (Pseudorca crassidens) in the waters of Hawai'i, Earthjustice, representing a coalition of conservation groups, filed suit in federal court in Honolulu today against the National Marine Fisheries Service, challenging the agency's failure to devise a plan to protect the whales from the Hawai'i-based longline fishery. The coalition includes Hui Malama i Kohola, the Center for Biological Diversity, and Turtle Island Restoration Network.

Each year, the Hawai'i-based longline fleet hooks and entangles false killer whales, resulting in serious injury or death through drowning. The Fisheries Service's own studies show that, for nearly a decade, the Hawai'i longline fishery has been killing Hawai'i's false killer whales at rates far beyond what the population -- which currently numbers only about 500 -- can sustain.

"In 1994, Congress amended the Marine Mammal Protection Act to require the Fisheries Service to try to eliminate marine mammal death and serious injury in commercial fisheries," explained David Henkin, an attorney with Earthjustice who is representing the coalition in court. "For years, the agency has ignored its legal duty to develop a plan to reduce the longline fishery's deadly interactions with false killer whales and other marine mammals. Hawai'i's marine mammals are paying with their lives for the Fisheries Service's refusal to comply with the law."

"The Hawaiian values of malama (to care for) and kuleana (to be responsible for) mean that we all have to take part in protecting Hawai'i's false killer whales from needless deaths in the longline fishery's gear," explained William Aila of Hui Malama i Kohola.

"The National Marine Fisheries Service has ignored our pleas to address the slaughter of false killer whales, claiming inadequate funds, but it's never bothered to ask Congress to appropriate the money needed to get the job done," said Andrea Treece, a senior attorney for the Center for Biological Diversity.

"Longlines attempting to catch tuna and swordfish indiscriminately kill whales, dolphins, and sea turtles. For far too long, the Bush administration ignored its obligation to save Hawai'i's false killer whales," said Todd Steiner, biologist and executive director of Turtle Island Restoration Network. "We call on the Obama administration to end this slaughter quickly, before it's too late."

On August 10, 2004, under pressure from an Earthjustice lawsuit representing the same three conservation groups, the National Marine Fisheries Service re-classified the Hawai'i-based longline fishery as "Category I" due to its excessive incidental take of Hawai'i's false killer whales. This reclassification officially triggered the Marine Mammal Protection Act's requirement to establish a "take reduction team" to devise a plan to bring the fishery's incidental take "to insignificant levels approaching a zero mortality and serious injury rate." Instead, for more than four years, the Fisheries Service has done nothing, claiming inadequate funding, while refusing to ask Congress for additional money.

A December 2008 Government Accountability Office study found that "the false killer whale is the only marine mammal for which incidental take by commercial fisheries is above its maximum removal level that is not covered by a take reduction team."