This is a printer version of an UnderwaterTimes.com article.
To view the article online, visit: http://www.underwatertimes.com/news.php?article_id=04237158106 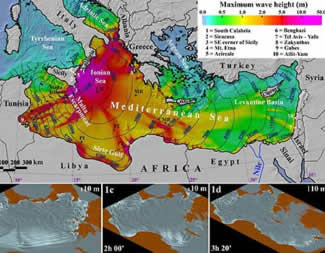 Maximum wave crests heights predicted by a computer simulation of the ancient event.

The collapse of the volcano, located on Italy's island of Sicily, was studied by Maria Teresa Pareschi and colleagues at Italy's National Institute of Geophysics and Volcanology. They modeled the collapse and discovered the volume of landslide material, combined with the force of the debris avalanche, would have generated a catastrophic tsunami, impacting the entire Eastern Mediterranean.

Simulations show the resulting tsunami waves would have destabilized soft marine sediments across the floor of the Ionian Sea. The authors, noting field evidence for such destabilization can be seen in other studies, speculate such a tsunami might also have caused the abandonment of a Neolithic village in Israel.

The study -- entitled "The Lost Tsunami" -- appears in the current issue of the journal Geophysical Research Letters.