This is a printer version of an UnderwaterTimes.com article.
To view the article online, visit: http://www.underwatertimes.com/news.php?article_id=04195762108 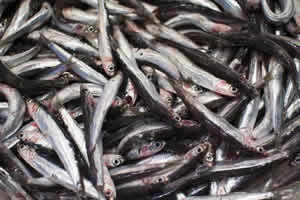 Anchovies are one of the fish whose livers contain the highest levels of these substances. Credit: Procsilas Moscas

ALMERIA, Spain -- The fishing industry usually discards fish livers, but a team of researchers from the University of Almeria (Spain) has confirmed that they are a good source of polyunsaturated fatty acids, which are beneficial to health. Anchovies are one of the fish whose livers contain the highest levels of these substances.

Fish livers have hardly been used to date, with exceptions such as cod livers, which are used to produce the well-known medicinal oil. In general, fishermen tend to throw fish entrails away into the sea, and if they make it to processing plants they are one of the first fish body parts to be discarded.

However, these organs contain compounds that are beneficial to health, according to a new study by scientists from the University of Almeria, which has been published in the Journal of Food Composition and Analysis.

"The livers of edible fish are a good source of long-chain polyunsaturated fatty acids (LCPUFA), especially those in the omega 3 family, such as eicosapentaenoic acid (EPA) and docosahexaenoic acid (DHA)", JosÃ© Luis Guil-Guerrero, lead author of the study, tells SINC.

These fatty acids are used to prevent and treat various complaints, such as some kinds of cancer, depression, Alzheimer's disease, schizophrenia, behavioural problems and cardiovascular diseases.

The study focused on 12 kinds of fish that are commonly eaten in south eastern Spain, such as hake, shortfin mako and European pilchard. The livers of the great weever (Trachinus draco) and the European anchovy (Engraulis encrasicolus) were those that showed up the highest levels of LCPUFA (51.4% and 47.9% out of the total fatty acids, respectively).

In addition, all the species had a combination of omega-3/omega-6 acids that was "beneficial for human consumption", especially in the case of the liver of the blue whiting (Micromesistius poutassou).

"Unfortunately, discarding these livers means that all their nutritional properties are missed", says Guil-Guerrero, "and if they were used this would also reduce the environmental pollution caused by throwing innards into the water, which is an inherent problem in the fish product processing industry in coastal areas".