This is a printer version of an UnderwaterTimes.com article.
To view the article online, visit: http://www.underwatertimes.com/news.php?article_id=03879106451 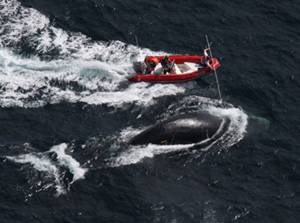 WOODS HOLE, Massachusetts -- On Friday, March 6, 2009, for the first time ever, a North Atlantic right whale that had been severely entangled in fishing gear, was administered a sedation mixture that made it possible for rescuers to remove 90 percent of the entanglement.

Team members on four boats assisted by an aerial survey plane worked for two days to free the animal. Eventually they succeeded in injecting the 40-foot, 40,000-pound whale with a mixture of sedatives that allowed them to cut away the gear that wrapped around the animal’s head.

The new sedation delivery system built by Trevor Austin of Paxarms New Zealand, comprises a 12-inch needle and a syringe driven by compressed air, which injects the drug into the whale’s muscle.

“This tool enhances fishing gear removal from entangled whales and minimizes the added stress from repeated boat approaches to the animals,” said Michael Moore, a veterinarian and research biologist at WHOI. Moore has led the investigation into chemical and physical tools to facilitate and enhance the safety of large whale restraint during efforts to remove entangling fishing gear. “It’s gratifying to have successfully employed this new technique.”

North Atlantic right whales are frequently entangled in fixed fishing gear, especially from the trap and gillnet fisheries. Many of them eventually disentangle themselves, but some entanglements persist for months, at times resulting in a slow and presumably very painful death.

Whale avoidance of boats attempting disentanglement is a major limit to successful resolution of complex cases. Over the past 10 years WHOI, in collaboration with NOAA Fisheries and two veterinary schools at the University of Florida and the University of Wisconsin have developed a sedation system to slow the animals and make them more approachable by rescue boats.

“The typical success rate for freeing right whales from fishing gear is about 50 percent due largely in part to the difficulties in getting close enough to cut the entangling gear,” said Jamison Smith, NOAA’s East Coast project leader for whale disentanglement. “We hope this new technique can improve the overall safety of the operations as well improve the chances of the whales’s survival.”

The animal (New England Aquarium catalog No: 3311) was first sighted entangled east of Brunswick, Ga., on Jan. 14, 2009, by the Georgia Wildlife Trust aerial survey team, which noted multiple lengths of heavy line cutting in to the whale’s upper jaw and left lip and trailing behind the animal. It was tagged with a telemetry buoy by the Georgia DNR to allow it to be tracked.

A disentanglement attempt by FWC, GA-DNR, Coastwise Consulting, University of Florida, NOAA and WHOI was made on Jan. 22, east of Amelia Island, Fla., but the whale evaded all attempts to cut the lines. On Jan. 23 further disentanglement attempts were made, with the addition of a sedation dose, delivered by remote syringe and needle with no success.

The dose given appeared to make the animal feel less pain, but was not sedated enough to be more approachable. Further disentanglement attempts by GA-DNR and Coastwise Consulting failed on Feb. 1.

On March 5 the disentanglement team made another attempt, this time increasing the dosage used on Jan. 23. The sedative appeared to cause the whale to take shallower, more frequent breaths, but the animal continued to evade the boat’s attempts to approach it. On Friday, March 6, a further increase in the dose resulted in a marked switch from the expected evasiveness. An hour after injection of sedatives, the animal no longer evaded boat approaches, but instead tolerated repeated close approaches by a disentanglement boat to allow removal of 90 percent of the remaining rope. Veterinarians on the team calculated the dosage based on experience sedating animals in captivity, starting low through the clinical range until they found a safe and effective level.

“Our prior experience with using these drugs safely in dolphins, beluga whales, killer whales and other species gave us the initial levels of sedatives to start with,” said Mike Walsh a veterinarian and associate director of the University of Florida College of Veterinary Medicine’s Aquatic Animal Health program.

“Our first attempts with sedatives in a previous animal were not as promising as hoped so we moved on to another sedative combination that has helped clinicians to get access to animals that may be less cooperative,” Walsh said. “This technique may greatly expand the options for the disentanglement teams dealing with these severely compromised whales, and the whales themselves. It is very exciting to be able to see it have an effect in an animal so large.”

The animal remains in very poor condition and has a guarded prognosis, but the disentanglement will give it a better chance for survival.

“This use of sedatives in a large free-ranging whale is novel and an exciting new tool in the large whale disentanglement toolbox,” said Moore. “However, it does not address the underlying problem of how to enable fixed-gear fisheries to pursue a profitable business, without jeopardizing the survival of endangered species such as the North Atlantic right whale.”