This is a printer version of an UnderwaterTimes.com article.
To view the article online, visit: http://www.underwatertimes.com/news.php?article_id=01931065827 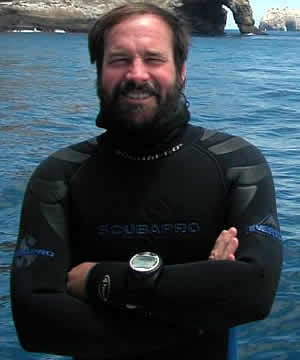 PROVIDENCE, Rhode Island -- There's been a rich debate in marine ecological circles about what happens to a key food source along rocky coastlines dominated by upwelling. The literature is filled with studies suggesting that the larvae of simple prey organisms such as barnacles and mussels hitch a ride on the coast-to-offshore currents typical of upwelling and are thus mostly absent in the coastal tidal zones.

That theory is getting a major challenge. In a paper in Ecological Monographs, Brown University marine ecologist Jon Witman and colleagues report that a key thread in the food web, the barnacle — the popcorn of the sea — flourishes in zones with vertical upwelling. Working at an expansive range of underwater sites in the Galapagos Islands, Witman and his team found that at two subtidal depths, barnacle larvae had latched onto rock walls, despite the vertical currents. In fact, the swifter the vertical current, the more likely the barnacles would colonize a rocky surface, the team found.

The finding "is counter to the prevailing notion about how marine communities are influenced by upwelling," said Witman, professor of biology in the Department of Ecology and Evolutionary Biology.

Barnacle communities thrived in the vertical-current sites, the team also found. The group routinely found specimens that had grown from one field season to the next to 3 centimeters (about 1 inch) in diameter — "big enough to make soup out of," Witman said. The researchers also documented the presence of whelks and hogfish, which feast on barnacles. This predator-prey relationship shows that vertical upwelling zones are "much more dynamic ecosystems in terms of marine organisms than previously believed," Witman said.

Witman and his team, including Brown graduate student Margarita Brandt and Franz Smith of CSIRO Marine and Atmospheric Research in Australia, chose a dozen sites of underwater cliffs, ledges and slopes along a 125-kilometer-long transect in the Galapagos. During three field seasons, the team bolted nearly 1,500 plates at depths of 6 and 15 meters to track the colonization of barnacle larvae and the growth of populations in areas with weak, intermediate and strong vertical upwelling.

The team also documented for the first time the strength of currents at the sampling locations, which included a dozen islands or outcrops located in the center of the archipelago. In areas with the most vertical upwelling, the researchers found, the current moved at a brisk 0.6 meters (2 feet) per second; the weakest vertical currents were measured at 5 centimeters (0.2 feet) per second.

Scientists who study coastal marine communities had assumed that prey species such as barnacles and mussels would be largely absent in vertical upwelling areas, since the larvae, which float freely in the water as they seek a surface to attach to, would more likely be swept away in the coast-to-offshore currents. Studies of the near-surface layer of the water in rocky tidal zones confirmed that thinking. But the field work by Witman and his group, in deeper water than previous studies, told a different tale: Few barnacles were found on the plates in the weak upwelling zones, while plates at the strong upwelling sites were teeming with the crustaceans. Flourishing barnacle communities were found at both the 6-meter and 15-meter stations, the researchers reported.

The scientists think the free-floating larvae thrive in the vertical-current zones because they are constantly being bounced against the rocky walls and eventually find a tranquil spot in micro crevices in the rock to latch on to. "It's a contact game," Witman said.

The team suggests the observations could hold true for other rocky tidal ecosystems. "We're one of the few people doing underwater experimental ecology in the Galapagos," said Brandt, who is Ecuadorean. "This project is one of the first attempts to do that."