This is a printer version of an UnderwaterTimes.com article.
To view the article online, visit: http://www.underwatertimes.com/news.php?article_id=01852763491 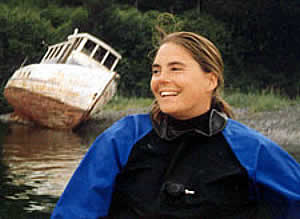 Mandy Lindeberg has a passion for seaweeds, the subject of her new book, Field Guide to Seaweeds of Alaska 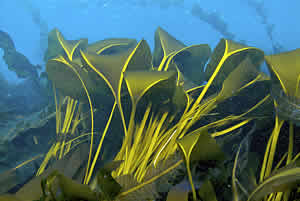 JUNEAU, Alaska -- Mandy Lindeberg always knew what she wanted to be when she grew up.

"I knew it would have something to do with the beach. I love that zone, it's so dynamic," said Lindeberg, a marine biologist with NOAA's Auke Bay Lab in Juneau.

"You can't really choose what you're passionate about, and it definitely is a passion for me," she said.

For Lindeberg, a federal fisheries biologist, her passion for the beach includes a fascination with seaweeds. So much so that she and fellow Juneau biologist Sandra Lindstrom authored a new book on the subject, "Field Guide to Seaweeds of Alaska."

To the uninitiated, such a book would likely be rather short. How many different seaweeds could there be in Alaska?

"There are more than 500 seaweed species, and counting," said Lindeberg. "People say to me, 'Wow, I had no idea there were that many.'"

About 100 of those species are described with full-color photos and descriptions in the new field guide just published by the Alaska Sea Grant Program at the University of Alaska Fairbanks. The new book is available at most local bookstores or directly from the Alaska Sea Grant bookstore.

The guide is the first of its kind for Alaska seaweeds, and it took Lindeberg nearly 15 years to compile it. Lindeberg said she began working on the book because scientists and friends needed itâthere just wasn't a decent reference book available.

"That was the big complaintâpeople would grab a specimen and try to identify it, and the books had drawings that didn't help much," Lindeberg said. "So I wanted to be sure to have photos of what they look like in their natural habitat; that was the big priority for me."

Besides seaweeds, the nearly 200-page water-resistant guide features sections on seagrasses and marine lichens. Lindeberg said she took about 80 percent of the photos during the course of two decades of fieldwork. Getting decent photos that could be used in a scientific guide proved difficult, she said.

"It's a big challenge to take photos on the beach, because it's usually raining and dark and everything is wet and is kind of a mess," said Lindeberg. "It took years for me to find the beach with the right species I needed, and then to get good weather and good lighting for it. It took a lot of patience."

Lindeberg did have some help. Colleagues at NOAA and the University of Alaska Fairbanks School of Fisheries and Ocean Sciences also contributed photos.

Sandra Lindstrom, a world-renowned seaweed taxonomist, is the book's coauthor.

"I could not have done this without Sandra," said Lindeberg. "She helped with the taxonomic work and reviewed the scientific descriptions and nomenclature."

With so many different seaweed species to choose from, asking Lindeberg to name her favorite is a bit like asking a mother to pick her favorite child.

Among the book's most interesting specimens is a newly discovered species of brown seaweed called the golden V kelp, so named for the bright yellow outline along the stalk and edges of the leaf-like structure called the thallus. Lindeberg said her discovery in 2006 of the new kelp species in the central Aleutian Islands might be the pinnacle of her career.

"That was one of those eureka moments," said Lindeberg. "There was no one around to hear me yelling and screaming. But there was no doubt when I first saw it that it was something very unique. Once we got the genetic analysis done, it turned out that it is a new genus and a new species, and it might even be a new family. So, to me that is very cool. You just don't find that kind of stuff on the planet anymore. I don't know how to top that."

Lindeberg might be able to top it with a future second edition of the book, which likely would feature more of the known species as well as some of the new species that she and her colleagues believe they have discovered.

"We found what we think are more new species of seaweeds during the survey in which we found the golden V kelp," said Lindeberg. "We don't know for sure yet, but we think we may have 15 new species to describe."

Learn more about Mandy Lindeberg and her new book, Field Guide to Seaweeds of Alaska.