This is a printer version of an UnderwaterTimes.com article.
To view the article online, visit: http://www.underwatertimes.com/news.php?article_id=01783569421 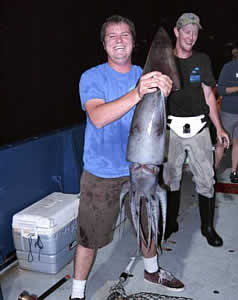 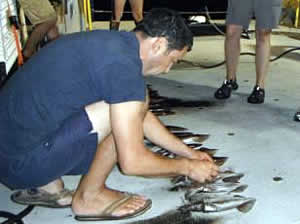 PALO ALTO, California -- While shorter days and colder weather move many of us to hunker under the covers, researchers who spent their summers in fieldwork are more likely to be hunched over microscopes and curled over keyboards, scrutinizing samples and crunching data from their summer's labors.

One such researcher is marine biologist William Gilly, who spent a month last summer in Mexico's Sea of Cortez tracking the sometimes-elusive Humboldt squid. Researchers from several universities were on the voyage. Gilly is in the second year of a quest to understand the surprisingly strong impact on the squid from an El NiÃ±o weather pattern during the winter of 2009-10 and, perhaps more important, how they are faring in their recovery.

In May 2010 Gilly was in the Sea of Cortez â one of the biologically richest marine environments in the world â with a biology class of Stanford undergraduates when they discovered that the squid, usually present in such large numbers that they are a staple species of the local fishing industry, were largely missing from their usual haunts.

"There were far fewer of them than normal, they were spread out over a huge area and they were very small. But they were also sexually mature and spawning â at a ridiculously small size," Gilly said.

"It was obvious that the squid were pretty screwed up."

Normally Humboldt squid spawn when they are 12 to 18 months old. But the precocious little spawners Gilly and his students found were less than 6 months old and weighed all of a pound apiece, compared with the usual weight of 20 to 30 pounds at maturity. One of the larger squid species, Humboldt squid are sometimes referred to as "jumbo" or even "giant" squid.

Searching the Sea of Cortez a month later on a research cruise, Gilly and two of the students eventually found large squid in an area about 100 miles farther north than usual, near the Midriff Islands, where Gilly suspects they had migrated in search of food.

In the squids' usual coastal habitat off Baja California, upwelling brings cold nutrient-rich water up from the deep, causing phytoplankton to bloom and marine animals of all types to congregate. The squids' palates are particularly partial to lantern fish â a slender, silvery, pinky-finger-sized species named for the small light-emitting organs on its sides.

But during an El NiÃ±o, warm nutrient-poor tropical water from the open ocean flows into the Sea of Cortez and pushes cooler water down 150 feet or more below the surface. The usual upwelling, driven by the wind, is not strong enough to pull the cool, nutritious water back up. So the upwelling just recycles the warmer water, causing the phytoplankton population â and all the creatures that depend on it â to crash.

That crash likely sent the squid searching for better food stocks, which could have led them to the Midriff Islands, where upwelling is driven by strong tides unaffected by El NiÃ±o.

"Squid can move to an area of tidal upwelling, which remains productive during an El NiÃ±o, and continue on their merry, giant-squid lifestyle and live to spawn when they are a year and a half old," Gilly said. Or they can move away from land into an open-ocean environment, where food is less abundant but the supply is steady, as its availability doesn't depend on upwelling.

"It is comparatively meager fare and you will not get to be a big giant squid, so instead you reproduce when you are six inches long. It is a different strategy, but it works," he said.

With oceanographic conditions back to normal this year, when Gilly headed down to Baja again, he expected that the squid situation would probably be normal, too. But big squid were again only found around the Midriff Islands.

While small squid were present throughout the Sea of Cortez, the little ones were larger than the year before by about 25 to 30 percent. And they were beginning to repopulate their old feeding grounds.

Humboldt squid only live 12 to 18 months, so memories of other feeding grounds probably fade fairly quickly when the squid relocate, especially if they are only living to be 6 months old. But Gilly suspects that with each new generation, more squid may rediscover the rich lantern fish feeding grounds of their forebears and the average squid will grow a little larger.

Whether the descendants of the squids that moved north will stay in the Midriff Islands and create a new, stable squid fishery remains to be seen â as of this October, they were still there. The food brought up by the tidal upwelling is mostly krill, tiny shrimp-like creatures that are a lot smaller and probably less nutritious than lantern fish, so it takes a lot more krill to help a Humboldt squid fatten up to its full potential. It may be that a revival of the lantern fish as a food source will eventually lure most of the squid back down south, with the whole squid diaspora reunited.

Gilly credits the undergraduate students in the holistic biology class with recognizing that the changes in the size and distribution of the squid population â along with different stomach contents in the squid they sampled â were the result of an El NiÃ±o year. That was unexpected, because the usual changes that come with an El NiÃ±o had not been seen along the California coast that winter. But the phenomenon that year was centered more toward the western Pacific than normal and thus did not extend as far north.

"The students really got it right, which is very cool for undergraduates to put that together," he said. "They convinced me that all the strange observations on squid were due to the fact that it was an El NiÃ±o year."

During 2011, commercial squid fishing in the Sea of Cortez has been slowly picking up, but fishermen are still struggling, because with smaller squid, it takes a lot more effort to catch the same mass of saleable squid as in previous years.

Fishermen have been so concerned about the sustainability of the squid fishery that a fishermen's cooperative orchestrated a meeting in June in Guaymas, Sonora, with scientists, government fisheries regulators and some nongovernmental fisheries conservation organizations. Gilly attended the meeting after his 2011 research voyage ended.

"It was a really good way to go about resolving a problem without waiting for the government to come and do something," he said. "They want to have a more stable fishery, and they are taking steps to make that happen."