This is a printer version of an UnderwaterTimes.com article.
To view the article online, visit: http://www.underwatertimes.com/news.php?article_id=01381074569 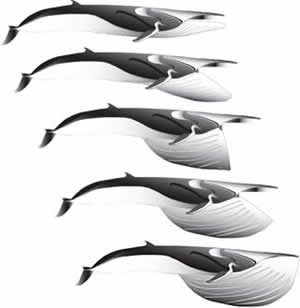 BERKELEY, California -- Some baleen whales, in their powerful feeding lunges, gulp a volume of water equal to a school bus, according to new calculations by biologists at the University of British Columbia and the University of California, Berkeley.

These big gulps more than double the whale's size, at least for the few seconds it takes for the whale to squeeze the water out through its rack of baleen filters to capture tasty shrimp-like krill.

"The scale of this activity almost defies imagination," said Nicholas D. Pyenson, a UC Berkeley graduate student in the Department of Integrative Biology and the Museum of Paleontology. The lunge carries the fin whale some 35 feet.

Pyenson, along with graduate student Jeremy A. Goldbogen and zoology professor Robert E. Shadwick of the University of British Columbia in Vancouver, published their findings in the November issue of the journal Marine Ecology Progress Series.

Goldbogen, Pyenson and Shadwick focused on the fin whale (Balaenoptera physalus), a large filter-feeding whale closely related to the blue and humpback whales, all of which are lumped together as rorquals. Up to 88 feet in length, these massive whales - second only to the blue whale in size - are known to feed in a series of lunges, each lasting about six to 10 seconds, in which they fill their mouths with krill-laden ocean water and then strain out the krill.

All of this happens underwater, Pyenson said, which makes studying the mechanics of these feeding lunges difficult. In the past decade, however, critter cams attached to whales via suction cups have provided video and audio of feeding whales, while digital tags have provided information on speed, body orientation and swimming strokes. These data, combined with more precise measurements of whale skeletons and baleen obtained from museum specimens, allowed the biologists to estimate the amount of water engulfed in a single lunge: 60 to 82 cubic meters (2,100 to 2,900 cubic feet) for a 20-meter (66-foot) adult fin whale.

They also calculated the energy required to make these open-mouthed lunges through the water, and concluded that the high cost of lunging is a primary limitation on the whale's ability to stay under water, and thus dive deep. According to Goldbogen, large whales should theoretically be able to stay underwater longer than smaller whales, yet fins and blues typically dive for only seven minutes, much shorter than the predicted time.

"The lunge creates an incredible amount of drag and essentially stops the whale dead in the water," Goldbogen said. "So any subsequent movement requires an acceleration from rest, which comes at a high energetic cost."

Because fin whales often lunge seven times per dive, such feeding behavior could rapidly deplete a whale's oxygen and require it to resurface before more feeding, Goldbogen said. Each mouthful, however, can bring around 25 pounds of krill, which means a whale could meet its daily energy requirements in about four hours of hunting.

The research was funded in part by the Remington Kellogg Fund of the UC Museum of Paleontology, while the whales' digital tags were provided by the U.S. Navy.