This is a printer version of an UnderwaterTimes.com article.
To view the article online, visit: http://www.underwatertimes.com/news.php?article_id=01072135689 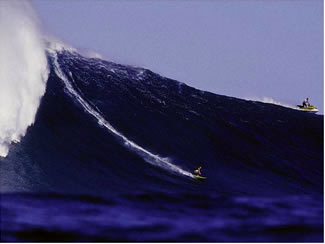 MARGARET RIVER, Australia -- The waves have been nicknamed Cyclops, Jaws and Dungeons and are the new life-and-death playground for a unique breed of surfers who ride gargantuan ocean waves as big as a seven storey building.

Australian surfer Alex Cater, 25, has been chasing giant waves for the past five years and knows only too well the agony and ecstasy of what they call tow-in surfing, where a surfer is whipped by jet ski into giant waves bigger than most tsunamis.

"If you don't have a bit of fear then you shouldn't be out there," said Cater. "When the lip hits the water it makes a massive cracking sound. It's like thunder for 10 seconds."

"In Hawaii, there's a spot at Waimea that when it's really big you will be underwater and hear boulders rolling around on the ocean floor," Cater told Reuters.

In July, at an offshore reef called Cowaramup Bombie off Margaret River in Western Australia, Cater was part a group of surfers who tackled the biggest waves ever ridden in Australia.

While Cater surfed 40-50 feet (12-15 metre) waves that day, making national television news bulletins, the ocean also swallowed him up and tried to tear him apart as if he was a rag doll.

After being mowed down by a wall of water Cater was hit by three massive waves and dragged 200 metres, or more than a football field, underwater. One wave pushed him so deep he was forced to equalise his ears twice.

"The impact is full-on. You get rag-dolled, you do cartwheels and ripped around violently. You just have to relax and try and enjoy it," says a laughing Cater. "As soon as you fight it, that's when you start to loose your breath and panic."

Hawaiian Pete Cabrinha holds the title for the biggest wave ever ridden -- a monster Jaws wave measuring 70 feet which broke on a reef off the Hawaiian island of Maui in 2004.

But the big wave surfers who follow the world's winter storms, hunting down massive ocean swells off Hawaii, California, South Africa, Mexico and Australia, believe a 100-foot (30-metre) wave will one day be ridden.

Rogue 100-foot waves, the height of a 10 storey building, were once a maritime myth but scientists say they are out there. Pressure readings from ocean buoys in the Gulf of Mexico during Hurricane Katrina indicated waves of that magnitude in the storm.

Amazingly there have been no tow-in deaths.

But there have been near drownings as surfers looking like fleas fly down giant waves, feet strapped to tiny boards, with a flotation vest to counter the tonnes of crashing water that will hit them if they wipe-out.

Injuries range from broken ribs and legs to torn muscles to ruptured blood vessels which leave surfers coughing up blood.

Cater trains like a free diver to expand his lungs, holding his breath underwater for 2.5 minutes, taking a gulp of air then back underwater for another minute, and then does it again.

Surfer Nick Carroll, co-ordinator of the annual Oakley/ASL Big Wave Awards in Australia-New Zealand, says there is a misconception that big wave surfers are all macho.

"The guys that take it on in big surf have the attitude of little kids," said Carroll. "They still have the same same stoke (excitement) they had about surfing when they were 13."

Surfers have been chasing big waves since the 1950s when Californians first headed to Hawaii to tackle big winter swells that smash onto the northshore of the island of Oahu.

Yet there was always a limit to the size of wave a paddling surfer could catch, as the bigger the wave the faster it travels.

In the mid-1990s a group of Hawaiians led by Laird Hamilton, the world's best big wave surfer, used a jet ski to whip themselves onto giant unbroken waves at around 48 kmph.

As the massive wave broke, the surfers were already speeding down the wave face, outracing the thunderous lip. The development of small tow boards with foot straps enabled them to use their speed to carve turns on the giant watery canvas.

Advancements in surf forecasting has also fuelled extreme big wave surfing, with surfers using the Internet and satellites to track storms and forecast when a giant swell will hit a reef.

The science of surf forecasting has led to the discovery of several new big wave spots such as Cortes Bank, a mid-ocean undersea mountain off California, and Dungeons off South Africa, a cold water surf spot where Great White Sharks hunt seals.

Surfwear giant Billabong offers $1,000 a foot for the biggest wave ridden each year and is offering an extra $100,000 bounty on a 100-foot wave.

But money is not what motivates these big wave surfers.

"I think it's a primal man versus nature challenge that fuels the attraction to surfing," said Bill Sharp, who runs The Billabong XXL Big Wave Award.