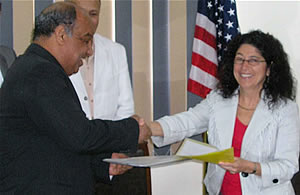 Florida Atlantic University and the Egyptian Ministry of Higher Education and Scientific Research have signed an agreement to cooperate on a range of oceanographic projects. Working through FAU’s Harbor Branch Oceanographic Institute (HBOI), the projects could include the development of state-of-the-art laboratories for research in aquaculture, coral reef biodiversity and conservation, and marine biotechnology at the National Institute of Oceanography and Fisheries (NIOF) Marine Research Center in Hurghada, Egypt, and would include the discovery of chemicals from marine organisms in the Red Sea that might have potential as pharmaceuticals. This collaboration between the Ministry of Higher Education and Scientific Research and HBOI will open up new opportunities for discovery and technology development as researchers, educators and exploration resources from FAU could be made available to advance marine research in the Red Sea.

The United States Department of State, the United States Department of Agriculture, and the Egyptian Ministry of Higher Education and Scientific Research are jointly funding and planning the projects under the U.S.- Egypt Science and Technology Cooperation Agreement. A public outreach program is already being anchored by the construction of a public aquarium being built in Hurghada, which will significantly contribute to the economic vitality of this region of Egypt.

Dr. Shirley A. Pomponi, executive director of Ocean Science, Technology, and Development, is leading the collaboration for HBOI. “This is an exciting opportunity for FAU scientists and students to explore the Red Sea, to develop scientist and student exchange programs, and to conduct research projects that complement what we're doing in Florida and the Caribbean," said Pomponi.

The Red Sea is a salt water inlet of the Indian Ocean between Africa and Asia, and has not been explored much below standard scuba diving depths. The Red Sea has a surface area of about 169,100 square miles and has a maximum depth of 2,211 meters (7,254 feet) in the central median trench. The sea possesses extensive shallow shelves which are noted for their marine life and corals. It is the world’s northernmost tropical sea and is home to more than 1,000 invertebrate species, and nearly 200 soft and hard corals.