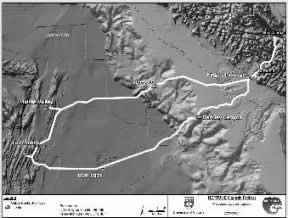 VICTORIA, Canada -- Last week's announcement that the data-gathering capacity of the NEPTUNE undersea observatory will be roughly triple what was originally planned already has scientists thinking about new avenues of research.

The $20-million funding boost will let NEPTUNE engineers expand the original project from two instrument packages ("nodes") to six. That will allow scientists to gather data from a much wider expanse of the ocean floor off Vancouver Island's west coast and examine underwater phenomena and natural processes in ways that simply aren't possible now. NEPTUNE project director Dr. Chris Barnes says that some of the new instruments will be located at Folger Passage, a point on the continental shelf near the Bamfield Marine Station research facility.

The project director points out that a recent biological phenomenon that made national headlines could have been documented in detail if NEPTUNE had already been in place. An "algae bloom" occurred off the west coast of Vancouver Island in June and was so massive that it was visible from space. Orbiting NASA instruments took photographs of the unusually large algae bloom, but the amount of information that could be gathered at sea level was limited.

"We got that as a snapshot at its peak, but why did it happen? What were the physical and chemical conditions of the seawater that allowed those sub-microscopic, individual cocolith (to reproduce to that extent)?" asks Barnes. "They were there in their billions and trillions."

Cocolith algae are sub-microscopic calcareous (calcium carbonate-based) organisms. They're part of the phytoplankton family and exist near the bottom of the food chain as a vitally important food source for higher forms of life. Barnes wants to know what happened after the algae died off and the chalk-like material associated with them eventually settled to the sea floor.

"How would that have affected all the physical and chemical processes in that marine environment?" asks Barnes. "If you're not out there when it happens - and we rarely are because they're unpredictable events - then how do we ever understand that?"

The Barkley Canyon node will house a small, robotic "crawler" that will be attached to a tether containing power and data cables. It will be capable of travelling about 100 metres along the edge of the shelf to collect information about the surrounding environment. Researchers are interested in exploring exposed deposits of solidified methane along that shelf.

Methane is a gas generated by microbes deep within the sediment. It tends to rise to the surface along fault zones and can turn into a solid when pressure and temperature conditions are just right. The slightly soft, white material is composed of methane, trapped water and sediment.

"It's usually tens to hundreds of metres below the sediment surface along the continental slope," explains Barnes. "Of course, methane is a serious greenhouse gas. Any significant change in ocean temperature might liberate methane and we're obviously interested to see what would happen with that response."

The material becomes unstable when exposed to air at the ocean's surface and is transformed from a solid to a gaseous state.

"That, of course, is what we're concerned about: the release of a lot of this methane over time," says Barnes.