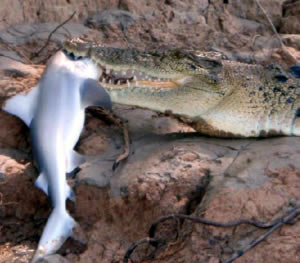 A crocodile with a shark in its mouth. credit: Paul van Bruggen 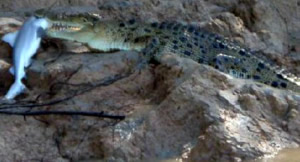 There'S no need to be scared of sharks when you're in the Territory -- the crocs usually get to them first.

Paul van Bruggen snapped these amazing pictures of a 2.5m saltie dining out on a shark on the banks of the Daly River.

"We went past one section of the river and we heard some splashing," he said.

"We looked across and saw a shark's tail coming up out of the water and then a crocodile's head came up and grabbed it." Mr van Bruggen said the crocodile knew exactly what it was doing, dragging the shark on to unfamiliar dry land before finishing off its prey.

"How smart is the crocodile? It if was you or me it would be dragging you in to drown you, but it takes the shark up on dry land," he said.

The fisherman, who was on the Daly River last Friday for the Barra Classic, said thecrocodile definitely wanted shark for dinner.

"We were about 15 metres away and it didn't bat an eyelid," he said.