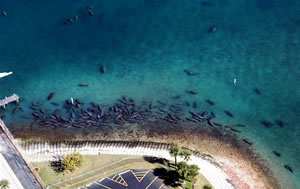 A team of scientists counted an all-time-high number of manatees during the annual manatee synoptic survey conducted the week of Jan. 19. The Florida Fish and Wildlife Conservation Commission's (FWC) Fish and Wildlife Research Institute (FWRI) reported a preliminary count of 3,807 manatees statewide. A team of 21 observers from nine organizations counted 2,153 manatees on Florida's East Coast and 1,654 on the West Coast of the state.

This year's count exceeded the previous high count from 2001 by more than 500 animals. In both years, survey conditions were favorable for aerial observations. Although synoptic results are not population estimates and should not be used to assess trends, the FWC is encouraged by this year's high count. Survey results are consistent with population models that show the manatee population appears to be increasing in Northwest Florida, along the Atlantic Coast and on the upper St. Johns River.

The synoptic survey is a count of manatees over a broad area. The survey provides researchers with a snapshot of manatee distribution and a minimum number of manatees in Florida waters at the time of the count.

Researchers have been conducting synoptic surveys since 1991, weather permitting, to meet the state's requirement for an annual count of manatees in Florida waters. Weather and manatee behavior affect synoptic survey counts. The best conditions for the synoptic survey occur during the coldest months of the year, when manatees gather at warm-water sites.

FWRI researchers are testing new survey methods that will provide a population estimate for Florida manatees as outlined in the FWC's manatee management plan. The adjustments to the survey will help achieve more accurate results and reduce dependency on the weather.