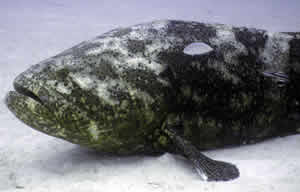 NEW YORK, New York -- Researchers from the University of Hawaii, the Wildlife Conservation Society, Smithsonian Tropical Research Institute, National Marine Fisheries Service and Projecto Meros do Brazil discovered a new species of fish—a grouper that reaches more than six feet in length and can weigh nearly 1,000 pounds. This newly discovered species can be found roaming the tropical reefs of the Eastern Pacific Ocean.

Was the massive fish hiding among the corals and sea grass to evade marine biologists? No, it was just a case of mistaken identity, as explained in a recent genetic study in the journal Endangered Species Research.

It turns out that goliath in the Atlantic—which inhabit the tropical waters of the Americas and western Africa—are not the same groupers that swim in Pacific waters, even though they look identical.

“For more than a century, ichthyologists have thought that Pacific and Atlantic goliath grouper were the same species, and the argument was settled before the widespread use of genetic techniques. The genetic data were the key to our finding: two species, one on each side of the isthmus.,” said Dr. Matthew Craig of the Hawaii Institute of Marine Biology, lead author of the study.

Because the two populations of grouper are identical in body form and markings, they were both considered part of the same species: Epinephelus itajara. About three-and-a-half million years ago—before the Caribbean and the Pacific became separated by present-day Panama—they were the same species.

Since that time, the two populations have evolved into genetically distinct populations. While testing the hypothesis that Pacific and West Atlantic grouper were the same species, the research team found significant differences in the DNA from both populations. The differences indicate that the two populations have effectively evolved into two separate species after being separated from one another by Central America. The new Pacific species is now classified as Epinephelus quinquefasciatus. E. itajara is currently listed as critically endangered to extinction in the World Conservation Union’s Red List of Endangered Species of Fauna and Flora. Due to its scarcity, E. quinquefasciatus may also be considered critically endangered.

“In light of our new findings, the Pacific goliath grouper should be treated with separate management and conservation strategies,” said WCS researcher Dr. Rachel Graham, a co-author on the study and convener of the first International Symposium on Goliath grouper which provided the impetus for this highly collaborative study.