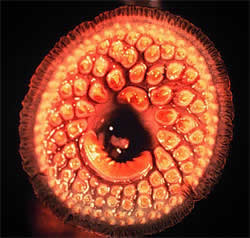 the blood-sucking lamprey has change little in 360 million years

CHICAGO, Illinois -- Scientists from the University of Witwatersrand in Johannesburg, South Africa, and the University of Chicago have uncovered a remarkably well-preserved fossil lamprey from the Devonian period that reveals today's lampreys as "living fossils" since they have remained largely unaltered for 360 million years.

Chicago's Michael Coates, PhD, joined Witwatersrand's Bruce Rubidge, PhD, and graduate student and lead author Rob Gess to describe the new find in the article, "A lamprey from the Devonian of South Africa" to be published in the Oct. 26, 2006, issue of Nature.

"Apart from being the oldest fossil lamprey yet discovered, this fossil shows that lampreys have been parasitic for at least 360 million years," said Rubidge, director of the Bernard Price Institute for Palaeontological Research.

Lampreys are long, eel-like parasites that attach themselves to and feed on other fish. Of the 46,000 known species of vertebrates, lampreys and hagfish are the only surviving jawless vertebrates. Lampreys are the most "primitive" of the vertebrates, meaning that they are the least changed from the first vertebrates. Besides lacking jaws, lampreys have no paired pectoral and pelvic fins, and no scales.

"This fossil changes how we look at lampreys today," said Coates, associate professor of organismal biology and anatomy. "They're very ancient, very primitive animals, yet with highly specialized feeding habits."

It reveals that the anatomical evolution of lampreys is more conservative than scientists thought, Coates added. Although they've gotten slightly longer, they specialized early and successfully and thus appeared to have stayed much the same for the past 360 million years.

"This discovery is a monument to the dedication and passion of [Gess], who has spent many months patiently excavating and unearthing the elusive secrets from the prehistoric past," Rubidge said.

Gess found the new specimen, Priscomyzon riniensis, 18 months ago in an ancient estuary in Grahamstown, South Africa. Preserved showing the underside, the fossil measures less than 2 inches long and reveals a set of 14 teeth surrounding the mouth that is proportionately larger than its descendents today.

"The most striking feature of Priscomyzon is its large oral disc, edged with a soft outer lip, supported by an annular cartilage, and surrounding a circular mouth," the authors wrote. "This is the first clear evidence of a Palaeozoic lamprey with an oral disc."

According to the scientists, this find greatly adds to what was a severely limited lamprey fossil record and, for the first time, places the origin of modern lamprey morphology deep within the Palaeozoic period. It adds essential new detail to the emerging and changing picture of early vertebrate evolution.

Until now, the lamprey fossil record included only those that show a side view but reveal little of the gill basket and feeding apparatus. However, earlier this year, Nature reported on a freshwater lamprey fossil found in the Jehol biota of China (Inner Mongolia) from the Early Cretaceous period (about 125 million years ago).

"There are few representatives of these early branches in vertebrate evolution that are still around today," Coates said, which is why so much scientific attention has been paid to lampreys. Although highly specialized in their own right, these primitive animals are used as surrogate ancestors for comparative research on living jawed vertebrates.

Because lampreys do not have bone or any substantial cartilage, they are extremely rare as fossils. This fossil not only reveals a nearly complete soft tissue impression, but it also pushes back their fossil record another 35 million years.

"These are pretty insubstantial animals," Coates said. "Lacking a boney skeleton, they rot down, leaving no hard parts, like a skull or ribs. So if a fossil site is discovered that yields impressions of the delicate remains of these animals, then this site needs to be explored thoroughly for other examples of exceptional preservation."

The scientists will continue to sort through much of the indeterminate material that is emerging from the ongoing dig.

Nearly 50 species of lampreys are found today in temperate rivers and coastal seas. Some species live in fresh water for their entire lives, but most are anadromous, hatching in fresh water, migrating to the ocean to grow and mature, and migrating back to fresh water to spawn and reproduce.

When adult lampreys return to fresh water, they stop feeding during winter and spawn the following spring. Eggs hatch after approximately three weeks and become blind larvae, called ammocoetes. After four to seven years, the ammocoetes metamorphose into juvenile lampreys called macropthalmia, which migrate out to the ocean and become parasitic adult lampreys, living just a year or two and growing up to 2 feet long.

Abundant in the Northeast United States, lampreys have a sucker-like mouth with a ring of cartilage that supports the rim of the mouth. It fastens on to a living fish with its teeth, rasps at the host's soft tissues with its piston-like tongue, produces strands of mucus to trap the food and feeds on the body fluids. A fish attacked by lampreys may be severely injured or even killed.