Freaky Fanged Fish Found In Utah Pond Stumps Experts; 'What Is This Thing?' 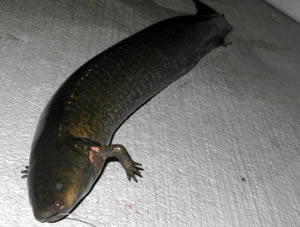 The mysterious creature was caught in a Florida lake. 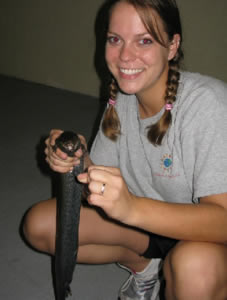 Shawna Mitchell with the mysterious creature.

OCOEE, Florida -- A fish-like creature with "legs" caught in a Central Florida lake over the weekend sparked a flood of controversy.

Shawna Mitchell said she was fishing on Starke Lake in Ocoee when she pulled something strange out of the water.

Mitchell's photos showed what appeared to be a fish with two front legs and no scales.

She said she was "freaked out a little bit" after pulling the creature to a pier.

However, an official has declared the "fish" to be a greater siren.

It's an amphibian that is a member of the salamander family. It is described as being very reclusive.

Mitchell said, "It was a great night of fishing that I won't forget any time soon," in an e-mail.