German National Charged In U.S. Federal Court With Smuggling 40 Tons Of Coral From The Philippines 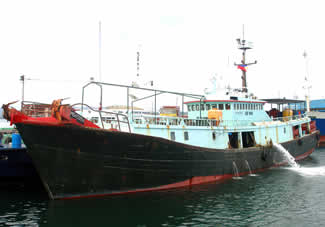 PUERTO PRINCESA, The Philippines -- Rangers of a world-renowned marine park won a victory on Monday when 30 Chinese fishermen were apprehended for poaching protected fish species and were brought to the provincial jail in Puerto Princesa.

Angelique Songco of the Tubbataha Park Management Office, a government agency handling the 33,000-hectare preserve, said the fishermen reached jail about 2:30 p.m. Monday, 10 days after their vessel, the Hoi Wan, tried to evade the rangers.

The fishermen carried only one bottle of mineral water each. Their lawyer, Songco said, announced intentions to post bail when courts open on Tuesday.

Songco said Judge Perfecto Pe boarded the Hoi Wan about 9:30 a.m. to personally see conditions on the vessel before signing the commitment order for the Chinese crew.

The fishermen were charged for violations of the Fisheries Code, specifically Section 87 (Poaching in Philippine Waters) Section 97 (Fishing or taking of rare, threatened or endangered species), Section 100 (Importation or Exportation of Fish of Protected Species).

Prosecutors also filed cases for the violation of the National Integrated Protected Areas System Act, and violation of the Wildlife Act (possession of wildlife, their products and derivatives).

However, the Chinese nationals refused to cooperate, insisting the reglementary period for the filing of cases had lapsed.

The prosecutor with the inquest after confirming the delay in the transport of the suspects from Tubbataha Reefs National Park to Puerto Princesa was due to insuperable cause.

Songco said members of the Palawan Committee on Illegal Entrants conducted on December 31 a joint inventory on the Hoi Wan.

The joint inventory team was composed of representatives from the Bureau of Customs, Bureau of Immigration, BFAR, Naval Forces West, NICA, the Provincial Police, Philippine Coast Guard, the Tubbataha Protected Area Management Board, the Palawan Council on Sustainable Development and the PNP Maritime.

Found onboard the vessel were various fishing paraphernalia, live fishes, including adult and juvenile Napoleon Wrasses, groupers and snappers.

Efforts to tow the Hoi Wan to Puerto Princesa were delayed because no Navy vessel was available before Christmas.

On December 26, the Bureau of Fisheries and Aquatic Resources dispatched a patrol boat to escort the Hoi Wan but rough seas and engine problems forced the government vessel to return to port.

The Philippine Navy finally dispatched its patrol ship to the park on December 28.

The fishers finally arrived in Puerto Princesa about 8 p.m. on December 29.