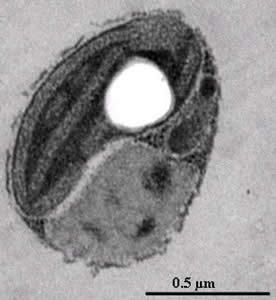 SAN DIEGO, California -- An international team of scientists led by Scripps Institution of Oceanography at UC San Diego and the Department of Energy's (DOE) Joint Genome Institute has peered into the genetic makeup of two species of phytoplankton, the tiny plants key in global photosynthesis and carbon cycling, and come away with surprising results about evolutionary engineering and new ideas about the role that a poorly understood chemical element may play in the world's oceans.

For several years, Scripps Oceanography's Brian Palenik and his collaborators, including scientists from France, Belgium and Germany, have been analyzing and annotating an organism called Ostreococcus. At one micron it is the smallest known phytoplankton and one of the smallest of all the eukaryotes, organisms with specialized internal cell structures that include plants and animals. A teaspoon of seawater taken off the Scripps Oceanography Pier typically contains more than 100,000 eukaryotic phytoplankton, which are found throughout the world's oceans. Phytoplanktons are responsible for nearly half of the planet's photosynthesis.

Advances in genomics have allowed scientists to begin digging deeply into a long-standing biological puzzle concerning the mechanisms behind the divergent genomes of related photosynthetic phytoplankton species. The international team's work, published in the online edition of Proceedings of the National Academy of Sciences, is the first comparison of the genetic makeup of two closely related eukaryotic phytoplankton and the mechanisms that make them biologically similar and distinct.

"Through our research we've been trying to understand Ostreococcus' role in marine ecosystems," said Palenik, who indicated Ostreococcus cells contain nearly five times the DNA of comparably sized organisms such as cyanobacteria. Genomics has taught us that you can learn much more when you can do a comparison. The first genome is exciting but the second genome is even more exciting because you can suddenly compare organisms and see what each is doing differently and what they are doing the same."

"These are pretty remarkable differences that we didn't expect," said Palenik, a professor in the Marine Biology Research Division at Scripps. "We would expect the DNA to change slowly and see a small number of differences between the two species as they slowly evolve… This is the case for much of the genome. From a future applied perspective, from our comparison we are learning the tricks nature has used to 'engineer' an extremely small eukaryotic cell. This may have future applications in bioengineering."

Another important finding described in the paper is the prominent role that the element selenium plays in Ostreococcus. Humans require selenium in small amounts and most people have roughly 25 selenium proteins. Tiny Ostreococcus organisms were shown to have up to 21 selenium proteins, an enormous number relative to their small genome and microscopic size.

Palenik believes this may be because selenium enzymes are some 10- to 50-times more efficient than similar enzymes that don't use selenium. Based on their size, such efficiency is important to help conserve resources such as nitrogen.

Future research by Palenik and his colleagues will involve a third Ostreococcus organism, which will lead to further comparisons and evolutionary evaluations.

"Genomic comparisons are exciting because they allow us not to just document the diversity of the ocean but to start to understand the processes behind that diversity and see all of the changes in the evolution of two species," said Palenik.