Scientists Digging Deeper Below Antarctica's Lake Vida; 'The Main Goal Is To Get Into That Brine Pocket' 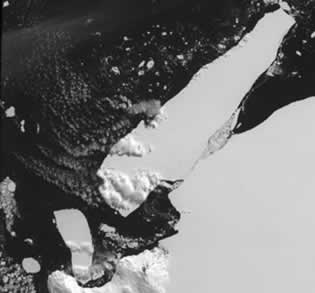 Landsat satellite image of iceberg B15 in January 2001. The iceberg covered about 11,000 square miles.

CHICAGO, Illinois -- A severe storm that occurred in the Gulf of Alaska in October 2005 generated an ocean swell that six days later broke apart a giant iceberg floating near the coast of Antarctica, more than 8,300 miles away. A team of scientists led by Professors Douglas MacAyeal at the University of Chicago and Emile Okal at Northwestern University present evidence connecting the two events in the October issue of the journal Geophysical Research Letters.

"We are reporting on a unique kind of seismological signal picked up by seismometers we deployed on the iceberg, which is generated by sea swell when it rocks the iceberg," said Okal, professor in geological sciences at Northwestern.

Oceanographers have known since the early 1960s that ocean swells can travel half way around the world. But the new study, funded by the National Science Foundation, raises the possibility that an increase in storms driven by climate change could affect far-flung parts of the globe.

"One of the things we're debating in the world right now is whether global warming might increase the storminess in the oceans," said MacAyeal, professor in geophysical sciences at the University of Chicago.

"The question we then pose is: Could global storminess have an influence on the Antarctic ice sheet that had never been thought of?"

Daily satellite images generated by researchers at the University of Wisconsin, Madison, showed that on a clear, calm day last Oct. 27, iceberg B15A broke into half a dozen pieces. B15A measures approximately 60 miles long and 18.5 miles wide. It is half of B15, which became the world's largest iceberg in March 2000 when it broke away from the Ross Ice Shelf in Antarctica.

Over the following years, MacAyeal and co-author Jonathan Thom from UW-Madison's Antarctic Meteorological Research Center had planted seismometers and other instruments on B15A and on Antarctica's Ross Ice Shelf to study "iceberg songs" and related phenomena.

"We deployed these instruments to look at a kind of harmonic tremor that the icebergs are making in a way that we still don't understand terribly well," Okal said. "We are trying to figure out how the icebergs are sort of making music when various phenomena that we think are linked to the cracking of iceberg masses takes place."

After the team observed the break up of B15A in satellite images, they arranged for a crew flying a Twin Otter aircraft from McMurdo Station in Antarctica to recover the seismometer left on B15A the previous year to learn more. That seismometer and others are on loan to the team from the national Incorporated Research Institutions in Seismology organization in New Mexico.

"They flew out to the iceberg, which was an all-day trip," MacAyeal said. "It was a superhuman effort, because they had to virtually fill the aircraft cabin with barrels of fuel, land several times, throw the fuel barrels out, pump the fuel into the wing tank, and then continue on."

The seismometer record showed movement in the iceberg starting 12 hours before the iceberg broke up and continuing for three days following. Despite prevailing mild conditions, the iceberg moved half an inch up and down and four inches from side to side. The research team suspected ocean swell as the cause.

"It's been known for a long time that swell can travel," Okal said. "If you have a seismometer on an island, the swell will hit the island and it will contribute to the noise of a seismometer. It plagues our seismic recording on island stations."

But islands respond to swell at a much smaller amplitude than the team's seismometer had recorded. "I was surprised at the level of amplitude that we were recording," Okal said. If the signal really did indicate ocean swell, the team decided, then there must have been a storm somewhere to create it.

The team was able to calculate the distance to the storm from seismometer data by comparing arrival times of the faster-moving long-wavelength waves to the slower-moving short-wavelength waves. To the scientists' amazement, the storm was 13,500 kilometers (8,370 miles) away.

"Our jaws dropped," MacAyeal said. "We looked in the Pacific Ocean and there, 13,500 kilometers away, six days earlier, was the winter season's first really big, nasty storm that developed and lasted for about a day and a half in the Gulf of Alaska."

The researchers then began uncovering other links of evidence leading from the Gulf of Alaska to the iceberg.

"We looked at the wave-buoy records in Hawaii and Alaska. We saw that the waves in Alaska were about 35 feet tall and then two days later they were down to 15 feet as they passed Hawaii on their way south," MacAyeal said. And three days after that, a sensitive seismometer on Pitcairn Island in the south Pacific recorded the passage of the storm waves.

"Finally, we see the waves arriving in Antarctica at the site where the iceberg broke up and at several other sites in Antarctica," he said.

Tiny ocean swells may seem too small to break an iceberg, but the crew of Captain Cook's Endeavour knew well their hazards. The Endeavour ran aground on the Great Barrier Reef near Australia on a calm night in 1770. "But there was just enough swell to pick up the Endeavour and pound it relentlessly against the coral heads," MacAyeal said. Until his crew lightened the ship, Cook feared it would be pounded to smithereens.

And just like the Endeavour, the iceberg had run aground near Cape Adare and the Possession Islands in Antarctica before the swell hit. "We think that B15A was in the right position where these waves would be fatal to it," MacAyeal said. "The iceberg shattered like a gracile wine glass being sung to by a heavy soprano."

The experience of B15A appears to be fairly common. MacAyeal and his colleagues also detected other distant storms in Antarctic seismometer records. "The most impressive event was a typhoon in the Pacific that had been a category five hurricane called Olaf. It produced a very strong reaction on all of our seismometers, so we know that hurricanes do send their waves down to the Antarctic as well," he said.

In fact, the team found that distant storms in the tropics and both the Northern and Southern Hemispheres correlated with all 38 seismological events recorded on their seismometers from December 2004 to March 2005.

Such events may also help explain some baffling paleoclimatic evidence from the north Atlantic Ocean. Between 15,000 and 80,000 years ago, the region looked much like Antarctica today. Deep-sea oceanographers have found layers of ice-rafted debris in ocean-floor sediments. This debris-sand that freezes into the bottom of a glacier-gets carried out into the ocean via icebergs. When the iceberg melts, the debris rains out onto the ocean floor.