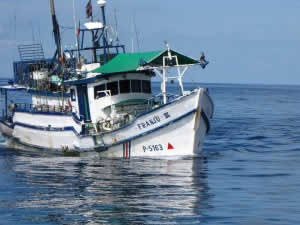 The Franju III, one of the vessels sighted inside Cocos Island's MPA

SAN JOSE, Costa Rica -- Costa Rican authorities have published a list of illegal pirate fishermen who have been operating within the Cocos Island marine protected area. The shameful first place prize for illegal entrance goes to "Albatros" with 23 illegal entries, followed by the vessel "Franju III" with 20 illegal entries, and in third place "Chaday1" with 18. In addition, the Franju S.A. company (CJ-603220049) and its vessels "Franju II" and "Coopepes 20", is responsible for 24 illegal entries.

These are the findings from the First List of Identified Vessels Illegally Entering Cocos Island, between January 2010 - September 2011, presented this past November 22 by the Minister of the Environment, Rene Castro (DM-952-2011), to Incopesca's president, Luis Dobles. Minister Castro also noted that these vessels used subsidized fuel in order to make these illegal fishing trips to Cocos Island and that they are in violation of their 40 mile navigation limits. The list contains 13 repeat offenders that constantly enter the Marine Protected Area of the Cocos Island National Park, a 22 km area where fishing is prohibited around the island, a UNESCO World Heritage Site since 1997.

"In Costa Rica there are hundreds of vessels operating in the Pacific, the large majority of which have captains and crews that want to contribute to a sustainable fishing industry," expressed Randall Arauz. "Unfortunately, this small group of 13 pirates is inflicting great damage on the country, nature, and their industry's reputation," said Arauz.

"The problem it that they're never punished, and they have no fear of violating the law time and time again," said Andres Jimenez. "Incopesca knows all about the comings and goings of these boats, but it keeps permitting the use of subsidized fuel and doesn't hold them accountable for their actions," continued Jimenez.

"Because the authorities are so lax when it comes to taking action against these pirates, were asking the country's fisheries directors to blow the whistle on these folks," said Leonora Jimenez. "It's all of our responsibility to protect Cocos Island and the biological treasure it represents, especially the national fisheries sector, one that's in need of sustainable fishing politics," added the international model.

Minister Castro asked Incopesca for a report detailing the administrative actions and judicial processes it has taken with the intention of conserving the environment and regulating the correct use of subsidized fuel and the correct use of navigation licenses.