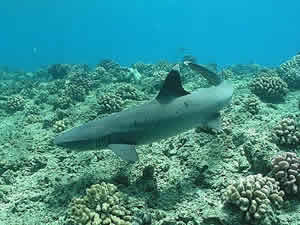 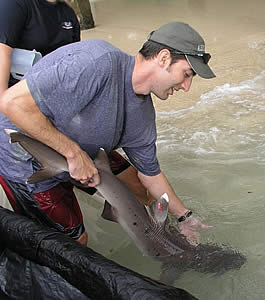 Dr. Nick Whitney tags and releases a whitetip reef shark during 2008 in Hawaii after taking a sample of its DNA. credit Nick Whitney/Mote

A notoriously "lazy" shark might secretly be a great ocean voyager, according to a new study by scientists from Mote Marine Laboratory, the Hawai'i Institute of Marine Biology and James Cook University in Australia.

The study, published this month and featured on the cover of the Journal of Biogeography, culminates nearly a decade of research using DNA to study the distribution of whitetip reef sharks (Triaenodon obesus). This species has puzzled scientists because it spends a lot of time resting on the bottom and seems to travel very little, but it is found throughout the tropical Pacific and Indian Ocean ā€" a wider range than many sharks that swim long distances.

Whitetip reef sharks are considered "Near Threatened" by the International Union for Conservation of Nature and are caught as bycatch by line and trawl in several fisheries, but no management plan for them exists throughout most of their range. Learning how populations mix and spread could help reveal what threats they face and provide knowledge to support conservation.

Plus, whitetip reef sharks are just a fascinating riddle.

"It's such a strange and enigmatic situation ā€" there's no other fish or shark this widely distributed where the adults seem to move so little within their habitat," said Dr. Nick Whitney, Manager of Mote's Behavioral Ecology and Physiology Program and lead author of the study. "Other reef fishes have eggs and larvae that are carried long distances by ocean currents, but whitetip reef sharks have just a few pups every couple of years and they aren't dispersed over a long range."

To learn how often whitetip reef sharks move over short and long distances, Whitney and colleagues gathered DNA samples to look for genetic differences among populations ā€" signs that they don't mix much. Whitney began collecting samples as a graduate student in 2002 at the University of Hawai'i, then the following year he joined forces with Will Robbins, then a grad student at James Cook University (currently with Wildlife Marine in Perth, Australia) who was leading a similar study. They analyzed their samples in the lab of Dr. Brian Bowen at Hawai'i Institute of Marine Biology. Their study included DNA from 310 whitetips distributed across 25 locations in the Indian and Pacific oceans.

On a large scale, genetics were surprisingly similar among whitetip reef shark populations ā€" even those separated by thousands of miles of deep ocean. For instance, whitetip populations in Australia's Central Great Barrier Reef, Hawaiian Islands and Cocos Islands (Costa Rica) were dominated by the same genetic type, suggesting that whitetip reef sharks may move between these populations at least once per generation. Such a long-distance voyage is likely impossible for many stronger-swimming, migratory shark species.

"Those were the animals that stayed long enough to be photographed and then re-sighted, but that doesn't mean that others weren't out having adventures on the high seas," Whitney said.

The whitetip reef shark might be a reluctant adventurer: A home body that occasionally makes a long trip by accident.

"Because of their relatively poor swimming abilities, they could be easily swept offshore or off course by storms or currents, and then seek shelter in drifting debris where they proceed to do what they do best: rest," Whitney said. "This is our hypothesis and we don't know for certain if whitetips show this 'rafting' behavior. But if anyone finds a whitetip reef shark in a pile of flotsam in the middle of the Pacific, they should give us a call."