Study: Male Fish Turn to Cannibalism When Paternity Uncertain; 'The Most Drastic Decision a Father Can Make'

Research: Cannibalism Of The Young Allows Individual Fish To Specialize 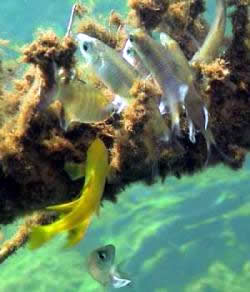 BURNABY, Canada -- A study from the February issue of the American Naturalist is the first to demonstrate that male fish are more likely to eat their offspring when they have been cuckolded during the act of spawning. Moreover, the more males that are present during spawning, the more likely it is that a male will try to eat the eggs when they are laid, as it is less likely that he fertilized them.

"The most drastic decision a father can make is to cannibalize his own offspring," writes Suzanne Gray ( Ph.D. candidate at Simon Fraser University ), Lawrence Dill ( Simon Fraser University ), and Jeffrey McKinnon ( University of Wisconsin – Whitewater ). "These results support and extend previous findings suggesting that confidence of paternity is a key factor in determining a male's behavior toward his offspring, including whether or not to eat them."

Predicted by theory, this pattern had never previously before been demonstrated. Studying Telmatherina sarasinorum, a small, colorful fish found in Lake Matano in Indonesia, the researchers found that females, who can be sure of their relationship to their eggs, never cannibalized. However, an increased level of cuckoldry led to an increased rate of cannibalism among males.

"We want to understand how behaviors evolve," says Gray, "and how behaviors, such as cannibalism, contribute to the diversity we see within and between different species."