Scientists: One Shot And Fish Forget Their Fears 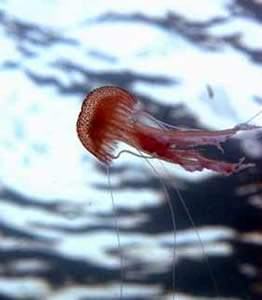 HEREFORDSHIRE, U.K. -- The presence of the mauve stinger jellyfish (Pelagia noctiluca) has been confirmed off the North West coast of Mull. The jellyfish was last seen in the area in 2007 when it caused widespread damage to fish farms through out the area and further afield. The Hebridean Whale and Dolphin Trust (HWDT) received a report from a local resident that while fishing on Wednesday (14th September) he encountered thousands of the ‘blood red’ jellyfish west of Ardmore Point. HWDT forwarded the report to the Marine Conservation Society (MCS) who coordinate a national jellyfish survey.

MCS explained that this wasn’t an isolated case and mauve stingers have been spotted off other parts of the west coast of the UK. Most recently large numbers have washed ashore on Fair Isle and at Reef Beach on the Isle of Lewis. This is in fact the third consecutive year that the jellyfish has been sighted. The small but destructive mauve stinger can cause serious economic problems, affecting aquaculture and the tourism industry through beach closures and unsafe bathing water.

“We are urging the public to help us record these jellyfish swarms so we can warn relevant local interests, such as fish farms, about their arrival”, said Peter Richardson, Biodiversity Programme manager, “We encourage anyone who encounters a jellyfish to download our free identification guide and report the jellyfish to our online survey on the MCS website (www.mcsuk.org)”.

The species is similar to the lion’s mane and moon jellyfish, but unlike these common UK coastal species, Pelagia noctiluca is an oceanic species. As an oceanic species it has direct development rather than a polyp phase on the seabed. Therefore the populations can reproduce rapidly when their plankton food is in plentiful supply, as it can be in coastal seas, which tend to be more productive than oceanic waters.