Diver Finds Class Ring Lost 18 Years Ago on Hawaiian Dive; 'It has to Mean Something' 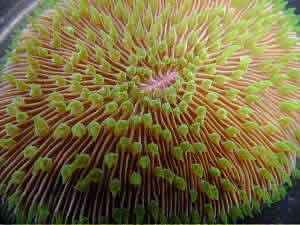 Fungia, one of the corals deposited into the frozen repository. Credit Ann Farrell 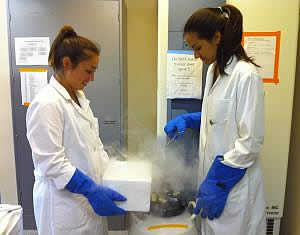 MāNOA, Hawaii -- Scientists at the Smithsonian Institution and the Hawai'i Institute of Marine Biology at the University of Hawaiʻi at Mānoa have created the first frozen bank for Hawaiian corals in an attempt to protect them from extinction and to preserve their diversity in Hawaiʻi. Mary Hagedorn, an adjunct faculty member at HIMB and a research scientist with the Smithsonian Conservation Biology Institute, leads the laboratory at the HIMB research facilities on Coconut Island in Kaneohe Bay, Oʻahu, that is banking the frozen coral cells.

"Because frozen banked cells are viable, the frozen material can be thawed one, 50 or, in theory, even 1,000 years from now to restore a species or population," said Hagedorn. "In fact, some of the frozen sperm samples have already been thawed and used to fertilize coral eggs to produce developing coral larvae."

Coral reefs are living, dynamic ecosystems that provide invaluable services: They act as nursery grounds for marine fish and invertebrates, provide natural storm barriers for coastlines, purify carbon dioxide from the atmosphere and they are potential sources for undiscovered pharmaceuticals.

However, coral reefs are experiencing unprecedented levels of degradation due to human impact. Globally, greenhouse gasses from burning fossil fuels are warming the oceans, making them more acidic and causing corals to stress and bleach. As a result, the corals are more susceptible to emergent diseases. Locally, reefs are affected by pollution and sedimentation from poor land-use practices, nutrient run-off from farms and waste-treatment plants, and destructive practices such as dynamite fishing and trawls.

Unless action is taken now, coral reefs and many of the animals that depend on them may cease to exist within the next 40 years, causing the first global extinction of a worldwide ecosystem during current history.

"This work highlights the importance of basic science and discovery for developing creative solutions to pressing conservation problems," said Steve Monfort, director of the Smithsonian Conservation Biology Institute. "We are confident that this effort will one day help to restore these vital marine ecosystems."

Saving reef habitat alone will not stop corals' decline because many of the most serious threats are global rather than local. Done properly over time, researchers can store samples of frozen material and place them back into ecosystems to infuse new genes and vigor into natural populations, thereby enhancing the health and viability of wild stocks.

Currently, the Hawaiian bank contains frozen sperm and embryonic cells from mushroom coral (Fungia scutaria) and rice coral (Montipora capitata), but it is only a beginning. The researchers hope to store many of the corals that are important to Hawaiian reefs.

Helping with this project are two student summer interns supported by the Smithsonian Women's Committee: Malia Paresa (a senior at the University of Southern California) and Kelly Martorana (a recent graduate of California Polytechnic State University in San Luis Obispo). This internship was an incredible experience for both women, but especially relevant to Paresa, who grew up five minutes from Kaneohe Bay.

"Before this internship, I had no idea how dire the situation was that many coral species are facing, and now I am much more aware that all of their hardships are caused by anthropogenic activities," said Paresa. "As a native Hawaiian and Kaneohe native, I take great pride in making a difference in the future of Hawaiian coral reefs. If we act quickly enough, we can make a difference to their future."

In addition, visiting scientist, Dr. Kamal Sarma from the Central Agricultural Research Institute on Nicobar and Andaman Islands, and Virginia Carter and Ann Farrell from the Smithsonian are assisting.

This research is funded by the Smithsonian, HIMB, Morris Animal Foundation and Anela Kolohe Foundation.