Research: Contrary To Recent Hypothesis, 'Chevrons' Are Not Evidence Of Megatsunamis; 'Wind' 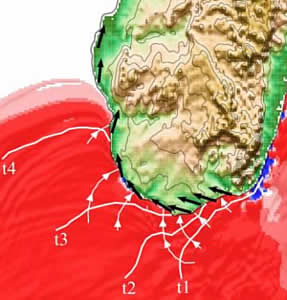 The black arrows indicate the orientation of chevrons along the southern coast of Madagascar; white arrows show the computed path from a tsunami event

SEATTLE, Washington -- A persistent school of thought in recent years has held that so-called "chevrons," large U- or V-shaped formations found in some of the world's coastal areas, are evidence of megatsunamis caused by asteroids or comets slamming into the ocean.

The term "chevron" was introduced to describe large dunes shaped something like the stripes you might see on a soldier's uniform that are hundreds of meters to a kilometer in size and were originally found in Egypt and the Bahamas.

But the discovery of similar forms in Australia and Madagascar led some scientists to theorize that they were, in fact, deposits left by huge tsunami waves, perhaps 10 times larger than the devastating Indian Ocean tsunami of December 2005.

Such huge waves, they suggest, would result from the giant splash of an asteroid or comet hitting the ocean. They also suggest one such impact occurred 4,800 to 5,000 years ago, and that chevrons in Australia and Madagascar point to its location in the Indian Ocean.

For example, she said, there are numerous chevrons on Madagascar, but many are parallel to the coastline. Models created by Bourgeois' colleague Robert Weiss show that if they were created by tsunamis they should point in the direction the waves were travelling, mostly perpendicular to the shore.

"And if it really was from an impact, you should find evidence on the coast of Africa too, since it is so near," said Bourgeois, a UW professor of Earth and space sciences who has studied earthquakes and tsunamis in various parts of the world.

In a paper in the May issue of Geology, Bourgeois and Weiss, an assistant professor of geology at Texas A&M University, conclude that "the extraordinary claim of 'chevron' genesis by megatsunamis cannot withstand simple but rigorous testing."

The scientists used an online program called Google Earth, made up of satellite images of the Earth's surface, to get close-up looks at chevrons in different locations. Chevrons often are found in coastal areas, but they also are common in semiarid areas inland.

"There are the same forms in the Palouse in eastern Washington state, and those are clearly not from a tsunami," Bourgeois said.

For the research, Weiss created a computer model that generated actual conditions that would occur during a tsunami. The scientists then used the model to examine what would happen if an asteroid or comet hit in the area theorized by the megatsunami proponents. The model showed the wave approach would be at a 90-degree orientation to the chevron deposits. But if the megatsunami interpretation is correct, the chevrons should be parallel to wave approach.

"That's just not the case here. The model shows such a tsunami could not have created these chevrons, unless you have some unimaginable process at work," Bourgeois said.

Asteroids and comets bombarded Earth in the distant past, at times with devastating consequences, such as the impact 65 million years ago that is believed to have sent dinosaurs to their extinction. There have been large impacts since but probably nothing comparable.

Proponents of the megatsunami theory have suggested that the dunes could not have been created by other forces, but Bourgeois believes their interpretation is faulty.

The discovery of marine fossils in some chevron formations seems to support the idea that a wave created the deposit, but Bourgeois discounts that evidence also.

"Marine fossils can get into non-marine deposits. It's not uncommon. You only have to change sea level a little bit or have them wash up on a beach in a storm," she said. "And some marine organisms can be carried by the wind. I am convinced these are largely wind-blown deposits."

She noted that similar deposits have been seen on the Kamchatka Peninsula on Russia's east coast, where she has conducted research for more than a decade.

"Those are made of volcanic ash, and they are not near the coast at all, yet they look very similar to these coastal chevrons," Bourgeois said.