How Whales And Seals Evolved To Dive In The Sea: Study Uncovers The Molecular Traces Of Evolution 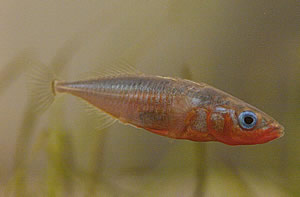 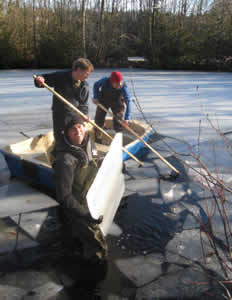 GUELPH, Ontario -- University of British Columbia researchers have observed one of the fastest evolutionary responses ever recorded in wild populations. In as little as three years, stickleback fish developed tolerance for water temperature 2.5 degrees Celsius lower than their ancestors.

The study, published in the current issue of the Proceedings of the Royal Society B, provides the some of the first experimental evidence that evolution may help populations survive effects of climate change.

Measuring three to 10 centimeters, stickleback fish originated in the ocean but began populating freshwater lakes and streams following the last ice age. Over the past 10,000 years, marine and freshwater sticklebacks have evolved different physical and behavioral traits, making them ideal models for Darwin's natural selection theory.

"By testing the temperature tolerance of wild and lab-raised sticklebacks, we were able to determine that freshwater sticklebacks can tolerate lower temperatures than their marine counterparts," says lead author Rowan Barrett from the UBC Department of Zoology. "This made sense from an evolutionary perspective because their ancestors were able to adapt to freshwater lakes, which typically reach colder temperatures than the ocean."

To learn how quickly this adaptation took place, Barrett and colleagues from Switzerland and Sweden "recreated history" by transplanting marine sticklebacks to freshwater ponds and found that in as little as three generations (or three years), they were able to tolerate the same minimum temperature as freshwater sticklebacks, 2.5 Â°C lower than their ancestral populations.

"Scientific models have suggested that climate change could result in both a general, gradual increase of average temperatures and an increase in extreme temperatures," says Barrett, who received his PhD last week.

"Our study is the first to experimentally show that certain species in the wild could adapt to climate change very rapidly â in this case, colder water temperature. However, this rapid adaptation is not achieved without a cost. Only rare individuals that possess the ability to tolerate rapid changes in temperature survive, and the number of survivors may not be large enough to sustain the population. It is crucial that knowledge of evolutionary processes is incorporated into conservation and management policy."