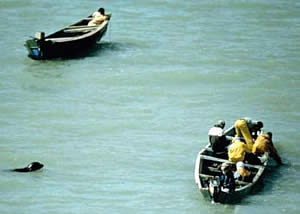 The monk seal and hump-backed dolphin are threatened by fishing activities off coast of Mauritania. Credit: Alex Aguilar

MADRID, Spain -- Catalan researchers have studied the marine trophic network in Mauritania, on the northwest coast of Africa, which is an extremely heavily exploited fishing area, as well as being home to two of the world's most threatened species of marine mammal â the monk seal and the Atlantic hump-backed dolphin. The results of the study show that industrial and traditional fishing activities along the coast are putting these mammals and local marine ecosystems at great danger.

The researchers studied the local marine trophic network off the northwest coast of Africa, and by analyzing stable carbon and nitrogen isotopes were able to verify the distribution and trophic position of 13 mammal species and also that of other species of macro seaweed, marine plants, fish, molluscs, turtles and phytoplankton, which had never been studied before.

The monk seal (Monachus monachus) and the Atlantic hump-backed dolphin (Sousa teuszii) are "the most coastal species of the whole area studied, and are the only ones occupying this marine ecosystem", Ana M. Pinela, lead author of the study and a researcher at the University of Barcelona (UB), tells SINC.

The Portuguese scientist says this area, which is so "extremely" over-exploited by both industrial and traditional fishing "should be a conservation priority for these species, which are important for biodiversity. If they disappear, it would be hard for others to take their place". This would cause a "serious" imbalance "at all levels" in local coastal ecosystems, which would remain without two super-predators that are "essential" for them to function properly.

The study, which has been published in Marine Ecology Progress Series, shows the importance of the predators Monachus monachus and Sousa teuszii for the proper functioning of coastal ecosystems in Mauritania.

The killer whale (Orcinus orca), which is also present in Mauritania, feeds at the same trophic level as the monk seal, meaning it feeds on fish, and not on marine mammals as it does off some other coasts. However, "its range is much more pelagic (of open oceans)", says Pinela, who has described the offshore ecotype of the killer whales in this region for the first time.

"Mauritania contains some of the most heavily-exploited fisheries habitats in the whole world, with one of the world's largest fisheries stocks, which is subject to very little regulation, inspection or control", explains the researcher. Two of the world's most threatened species live off this coast â the monk seal, which is on the verge of extinction, and the hump-backed dolphin, which has a very limited geographic range and is little known.

The scientists say conservation of these coastal areas should be "a priority". "The Mauritanian Government and international agencies should more strongly monitor both industrial and traditional fisheries exploitation both in deep sea and coastal areas", says Pinela. Over-fishing and the over-exploitation of resources limits the availability of prey for these species and damages ecosystems.

The research team is calling for "more diligent" regulation of such fishing practices, monitoring and control of the fishing fleet, "be it Mauritanian or international", and the implementation of sustainable fishing off the north west of Africa.

In addition, estimates should be made of fish abundance and catches in the entire study area, because it is "a biodiversity hotspot that is home to a great diversity of marine mammals", concludes Pinela.