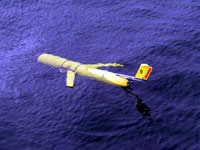 The glider on the ocean surface before it descends to begin a mission. (Photo WHOI)

WOODS HOLE, Massachusetts -- Like robots of the deep, autonomous underwater vehicles, or AUVs, are growing in number and use in the oceans to perform scientific missions ranging from monitoring climate change to mapping the deep sea floor and surveying ancient shipwrecks. Another use for these versatile platforms has now been found: monitoring the lives of whales.

Marine mammals are major predators in the ocean, but little is known about many of them and how changing ocean conditions affect their distribution. Traditional ship or aerial surveys rely on human observers to detect marine mammals, but these observations are limited to daylight hours and periods of calm seas and good visibility. As a result, these surveys are time-consuming, inefficient, and expensive. Marine mammals can also be detected by passively listening for their vocalizations. Passive acoustic monitoring of marine mammals is unaffected by weather, but most applications to date have involved moored or fixed recorders that can assess only when marine mammals appear in a single location.

Scientists at the Woods Hole Oceanographic Institution (WHOI) have reported the first use of passive acoustic recorders in an ocean glider, a type of AUV that looks like a large model airplane and can work in water depths to 1,000 meters (about 3,300 feet) or more.

Gliders move both horizontally and vertically in the ocean and work around the clock in all weather conditions, typically up to a month or longer depending on the project. The vehicle carries a variety of high-resolution sensors to collect oceanographic measurements such as temperature, salinity, and fluorescence (a measure of phytoplankton abundance). Gliders also operate silently, which make them ideal for passive acoustics studies. Researchers say the gliders are a promising, cost-effective, and efficient alternative to long-term ship-based studies given ship costs in the thousands of dollars a day.

Mark Baumgartner, an assistant scientist in the WHOI Biology Department, reported findings from a pilot study involving the deployment of recorder-equipped gliders today at the biennial Ocean Sciences Meeting in Honolulu, Hawaii. Baumgartner said vocalizations of baleen whales, including right, sei, and humpback whales, could be heard on all of the glider recorders during the five-day project conducted in 2005 off the coast of Cape Cod, Massachusetts.

The WHOI team custom built digital audio recorders, installed them inside the gliders, and then deployed the gliders near an aggregation of right and sei whales. A gale moved through the area just after the gliders were deployed bringing high winds and 17 foot seas that made traditional ship-based marine mammal observations impossible. In contrast, Baumgartner said the gliders operated "flawlessly", collecting data continuously through the gale.

Baumgartner and colleagues have found a close correspondence between changes in the rate of sei whale calls and changes in the near-surface abundance of copepods, the sei whale's primary prey. The copepods, a tiny shrimp-like animal, were observed with an echosounder on the glider. According to the scientists, the changes in abundance were a result of the copepods' daily migration from the surface to the bottom at dawn and from the bottom to the surface at dusk.

Baumgartner said the long-term goal is to study where marine mammals go and what they do over time scales of weeks to months using unmanned survey vehicles like gliders that are capable of collecting both acoustic recordings and oceanographic measurements. "Our five-day pilot project clearly demonstrated that gliders can be used to collect high quality acoustic measurements. We are now working to extend the capabilities of the acoustic system to investigate baleen whale habitat in ways that have not been possible until now." The scientists are currently focusing on baleen whales because they are endangered and at particular risk from fishing gear entanglements and ship strikes.

Future work will focus on extending the duration of the recordings, developing a capability to report detections of whale vocalizations to land-based researchers in real time, and monitoring the high-frequency vocalizations of other marine mammals, such as dolphins, sperm whales, and beaked whales.