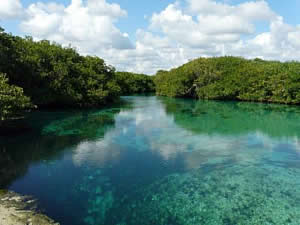 Cenotes provide a potential route for contamination of the flooded underground aquifers of the Yucatan Peninsula. Credit: Hanneke van Lavieren

The wastes contaminate a vast labyrinth of water-filled caves under the popular tourist destination on the Yucatan Peninsula. The polluted water flows through the caves and into the Caribbean Sea. Land-sourced pollution may have contributed, along with overfishing, coral diseases, and climate change, to the loss since 1990 of up to 50% of corals on the reefs off the region's coast.

And, with a 10-fold increase in population through 2030 expected, the problems are likely to worsen, according to research published today in the journal Environmental Pollution.

"As well, prevention and mitigation measures are needed to ensure that expanding development does not damage the marine environment and human health and, in turn, the region's tourism-based economy."

The researchers concluded that illicit drugs, pharmaceuticals and personal care products found in the groundwater at four of the five locations originated from domestic sewage.

The illicit drugs identified were cocaine and its major post-digestion "metabolite" chemical, benzoylecgonine.

Also found were caffeine and a metabolite of nicotine and the ingredients of personal care products such as:

The researchers point to pit latrines, septic tanks and leaking sewer lines as the pollution's likeliest points of origin, noting that just one-third of the state is served by municipal wastewater treatment systems.

Samples drawn near a golf course on a seaside resort, pointed to pesticide applications as another contamination source.

Reverse osmosis systems for treating drinking water are widely used in the Riviera Maya, "but this technology is unlikely to remove all micro-contaminants," the study says.

While the levels of pollution found are not considered a health threat today, "the data provided in this study raise some concerns about the potential for human exposure from the consumption of contaminated drinking water."

The researchers note the area has "a general lack of expertise and equipment for monitoring or tracking sources of pollution," and "few administrative links between those responsible for water and coastal management and the labs that generate the (monitoring) data."

They warn too that a combination of sea-level rise and over-extraction of freshwater contributes to saltwater intrusion into the aquifers, posing a threat to the region's freshwater quality and availability.

Without integrated approaches to protecting and managing the aquifer, "the tourism-based economy of the Maya Riviera region will not be sustainable over the medium to long term," the researchers conclude.

They deployed two types of passive sampling devices in five locations at depths of 1.5 to 10.5 meters to sample groundwater flowing under the area at a rate of 0.5 to 2.5 km per day to measure concentrations of contaminants and determine possible sources. The freshwater in these aquifers forms a distinct lens on top of intruding salt water. The two water layers meet and mix in these flooded cave systems, which extend 8 to 12 km inland.

"Diving down a sinkhole into these flooded cave systems was a truly unique experience - and slightly terrifying for someone diving in a cave for the first time," says Ms. van Lavieren, a programme officer at UNU-INWEH and trained rescue diver. "It is hard to imagine the actual size and shape of these cave systems without actually being in them. Thankfully, we were helped by experienced divers in the area to deploy and collect the passive samplers."