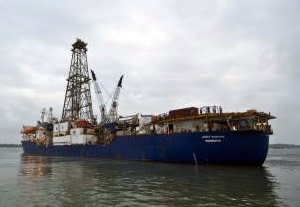 WASHINGTON, D.C. -- Senior officials from the U.S. National Science Foundation and the U.S. Implementing Organization for the Integrated Ocean Drilling Program today marked the occasion of the research vessel JOIDES Resolution sailing off from Singapore for science sea trials and transit to Honolulu, after a complete transformation to modernize and upgrade the ship in a Singapore shipyard.

The JOIDES Resolution is the U.S. research vessel for exploring and monitoring the sub-seafloor; it operates as part of the international Integrated Ocean Drilling Program (IODP). The U.S. Implementing Organization (USIO) for IODP is comprised of Texas A&M University, Lamont-Doherty Earth Observatory of Columbia University, and the Consortium for Ocean Leadership.

Dr. Robert Gagosian, president and CEO of the Consortium for Ocean Leadership, commented, "This is a long-awaited day for the world of ocean research." He continued, "The JOIDES Resolution is operational again for IODP expeditions at an extremely important time, when our need for scientific understanding of our ocean planet – and climate and energy challenges – is at its greatest. The research pursuits of thousands of scientists around the globe will be enhanced in a major way by the future work of JR."

"We are extremely pleased to see the JOIDES Resolution set sail once more for science – with a vastly improved capability for performing cutting-edge research into the secrets of Earth's past climate, past ocean conditions, deep biosphere and interior," says Tim Killeen, NSF assistant director for geosciences. "NSF congratulates all involved in the successful refit and modernization of this major research platform."

Steven Bohlen of Texas A&M University and interim director of science services at IODP, remarked, "Speaking from close ties with the community of scientists involved with many aspects of IODP's work, I can say what a huge thrill it is, for all of us, to have this important vessel back in action."

Already a 20-year workhorse on behalf of scientific ocean drilling, the JOIDES Resolution (JR, for short) has been completely refurbished. The JR is now poised to help IODP continue to push the edge of the envelope of science by collecting unique sub-seafloor samples and data that would otherwise remain out of reach to researchers. Expeditions onboard the JR help improve scientific understanding of: the causes of natural hazards such as earthquakes and tsunamis; Earth's changing climate conditions over the past 100 million years; methane hydrates – 'frozen' deposits of methane gas that show potential to be a major factor in climate change; and future rising sea levels by examining the evidence of past sea level rise and climate change contained in the archive of seafloor sediments.