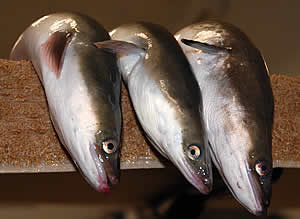 CHARLOTTENLUND, Denmark -- Researchers in Denmark and Norway are on a quest to uncover the truth behind the dwindling number of eel stocks. The study is funded in part by the EELIAD ('European eels in the Atlantic: assessment of their decline') project, which has received EUR 2.63 million under the Environment Theme of the EU's Seventh Framework Programme (FP7). The research was recently presented in the journal Aquatic Biology.

Experts from the National Institute of Aquatic Resources at the Technical University of Denmark (DTU Aqua) and the Norwegian Institute for Nature Research are diligently working to find out why the number of European eels is dropping, and if the loss is linked to any problems they encounter during their migration to spawning grounds in the Sargasso Sea.

'Eels begin to leave their home rivers in autumn, and the first phase of their migration to the coast is very risky for them,' explains DTU Aqua's Kim Aarestrup, lead author of the study. 'We investigated the mortality of eels in this first phase by following 50 migratory silver eels as they swam through the lower parts of the River Gudenaa and in the first phase of the marine migration in Randers Fjord. We looked at both the behavior and the survival rate during this first part of this migration.'

Their data show that 21% of the eels in the fjord were reported caught by fishermen (both anglers and commercial). However, fishing likely had the biggest impact on the missing eels in the fjord. After questioning fishermen, the researchers confirmed that tagged eels (the exact number is not known) had been caught in the fishery without being reported.

It should be noted that as the tags were implanted internally, the researchers could not determine straight away if the eel was tagged. So eels sold and exported alive may in fact be tagged eels, they said.

The team did not find transmitters in the fjord through manual tracking. Therefore, they ruled out the possibility that some of the eels were eaten by other fish in the fjord. They suggested that a number of eels could have been eaten by birds capable of carrying eels (along with transmitters) out of the water. They pointed out, however, that the chances of this happening with the largest eels in the study were very little only because they were too big to be carried.

Ultimately, the experts believe that fishing is the culprit behind the loss of eels.

Dr Aarestrup said it is important for more eels to survive in the river-fjord system if the EU recovery plan - concerning eels reaching the Sargasso Sea successfully - is going to be met.