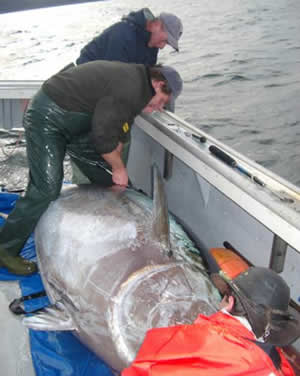 BABYLON, New York -- A giant Atlantic bluefin tuna weighing more than half a ton had the honor of being fitted with the 1000th electronic tracking tag placed on this threatened species when it was caught and released on Monday (October 20) in the Gulf of St. Lawrence off Port Hood, Nova Scotia.

The TAG team has been tagging bluefin tuna since 1996, when the first tag was put out on a bluefin tuna off North Carolina's Outer Banks. Led by Stanford University professor Barbara Block, the team has traveled from the Gulf of St. Lawrence to the Gulf of Mexico and from Ireland to Spain to tag Atlantic bluefin tuna.

Placing 1,000 tags on giant bluefin has been a long quest for TAG researchers, whose work has helped to reveal the life histories of these amazing, elusive creatures at a time when their commercial value is soaring and their population has declined to a fraction of its historic levels – prompting calls for a moratorium on the commercial fishery so the Atlantic giants can recover.

The tagging data assembled by the TAG researchers have been vital in identifying how populations of bluefin tuna use the North Atlantic, leading to new discoveries about their physiology, their migratory patterns and their population structure.

Electronic tagging is a carefully orchestrated process, refined through years of experience in the field and in the Tuna Research and Conservation Center in Pacific Grove, California, which is operated jointly by Stanford University and the Monterey Bay Aquarium.

In the field, fish are caught using rod and reel and brought aboard the fishing vessel, where tags are externally attached, or surgically implanted inside the tuna. Each tag, ranging in price from US$1,500-$3,500, records sunrise and sunset, pressure (or depth), water temperature and body temperature. When months or years later a fisherman catches the tagged tuna, the fisherman receives a handsome reward for returning the electronic tag to scientists who then download the data into a computer for analysis.

Some tags do not even need to be physically retrieved but rather transmit their data to researchers via satellite. Using astronomical techniques similar to those used by 17th century mariners, the tuna's position on earth can be calculated from sunrise and sunset data, revealing the migratory track of individual fish as they swim throughout the North Atlantic Ocean and adjacent seas. The longest migration recorded to date was from a fish caught, tagged and released in North Carolina that over the course of 4.8 years traveled across the North Atlantic and into the Mediterranean.

Bluefin tuna are often described with superlatives: largest, fastest, most powerful. They are long-lived, among the largest fish on earth—weighing up to 1,500 lbs—and make trans-oceanic migrations in as few as 20 days.

The same muscles that power their locomotion across ocean basins are at the heart of the sushi economy that has made the bluefin so prized by diners. Global demand for bluefins has grown dramatically in recent years, and sushi connoisseurs revere bluefin tuna above all else. A single fish sold at auction in Japan for $173,000 – pricing that has fueled industrial fishing pressure and has led to the near-collapse of bluefin populations in both the West and East Atlantic.

Tag-A-Giant research is providing fisheries managers with the information needed to design and implement sustainable limits for commercial and recreational fisheries for bluefin tuna to reverse the decline and put the species on the road to recovery.

Data from the tagged fish have revealed that bluefin tuna routinely swim across the Atlantic, with fish tagged off the coast of North America visiting spawning grounds in the Mediterranean and in the Gulf of Mexico. The data show that the western and eastern populations forage together on common fishing grounds, then move to distinct spawning grounds when it is time to breed. As a result, fish from both populations are affected by fisheries on both sides of the Atlantic.

The tagging data were recently confirmed using a completely different technique, based on chemical analysis of the tunas' "otoliths," or ear bones, which retain a characteristic chemical signature depending upon where the tuna was originally spawned.

A unique aspect of this study, published in the journal Science, shows that the large fish that visit the northern waters of Canada are derived primarily from the Gulf of Mexico breeding stock, and that and that there is a mixture of fish from both Gulf of Mexico and Mediterranean stocks in waters along the U.S. continental shelf.

The electronic tags have also revealed these giant tuna dive to depths of nearly a mile and range through waters from the tropics to frigid polar seas. They can do so because bluefins are among the rare ocean animals that have the capacity to maintain a warm, stable body temperature throughout their wide thermal niche – much like a mammal or bird.

TAG data have also helped to uncover where, when and how bluefin tuna spawn, at what age they mature, and are helping to increase the accuracy of population estimates for Atlantic bluefin tuna.

The 1,000th tag is riding on the back of a bluefin tuna, recording its every move. Of the 1,000 tags deployed since 1996, approximately half have been recovered or reported back, documenting more than 21,000 days of tuna behavior. The remaining tags are still at large on giants swimming in the North Atlantic, Mediterranean and Gulf of Mexico.

The TAG team continues to pursue its work, collecting new information that will help ensure a future for Atlantic bluefin tuna.