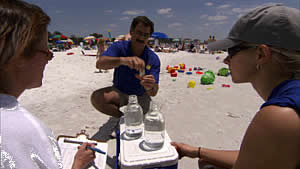 SARASOTA, Florida -- The most cohesive and longest-running scientific study looking at how humans are affected by Florida's red tide officially wrapped up last Thursday, March 24, 2011, at Mote Marine Laboratory during a meeting of the 22 investigators from eight organizations who have been studying the human health effects of Karenia brevis since 2000. This ground-breaking study led to hundreds of new findings and even potential new drug treatments for cystic fibrosis and COPD sufferers.

While many of the researchers involved in the project will continue their studies of red tide and human health, the overall study funded through the National Institute of Environmental and Health Sciences (NIEHS) is complete, with official results due back to NIEHS in June.

The $15.8 million NIEHS project was based on a "beach-to-bedside" model designed to reveal the effects of naturally occurring chemical toxins by incorporating numerous scientific disciplines â everything from medical professionals and oceanographers to chemists and pharmacologists.

The study was led by Dr. Daniel G. Baden, Director of the Center for Marine Science at the University of North Carolina Wilmington, with field research led by Dr. Barbara Kirkpatrick, based at Mote Marine Laboratory in Sarasota. In addition to UNCW and Mote, the study included lead investigators from the Centers for Disease Control and Prevention (CDC), the Florida Department of Health, the University of Miami Rosenstiel School of Marine and Atmospheric Sciences and Miller School of Medicine, Lovelace Respiratory Research Institute, New Mexico, Cincinnati Children's Hospital Medical Center and the Mount Sinai Medical Center, Miami.

The study began in response to questions and complaints from workers, residents, healthcare providers and public healthcare workers about the possible respiratory and health effects of Florida red tide. This natural phenomenon is caused by blooms of the algae K. brevis. Because Florida red tide cannot be reliably predicted, it is important to understand and mitigate for its effects on the environment and human health.

More than 500 Southwest Florida residents volunteered to participate â that included people with chronic lung conditions, as well as people without compromised lung function. It also included Sarasota County employees and even residents who let researchers place air sampling devices in their driveways.

"We thank the citizens of Sarasota and Manatee counties for supporting this research over the years," Kirkpatrick said. "Without the community's participation, our studies would not have been as complete or as enlightening."

"Thanks to the NIEHS's beach-to-bedside model, we were able to bring together researchers from many different disciplines to attack Florida's red tide and unlock its affects on humans," said Baden, the principal investigator. "We learned more during this study than scientists had been able to uncover in the past 150 years because this collaboration was so large, so well funded and included so many different experts."

The NIEHS funding also allowed researchers to broaden their efforts by seeking additional grant money from other places including the Florida Department of Health, the Centers for Disease Control, the National Oceanic and Atmospheric Administration (NOAA) and the National Science Foundation (NSF).