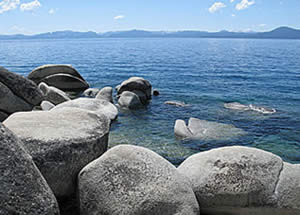 Still unclear is how the changes would affect the lake's phenomenal clarity and cobalt-blue color. (Sylvia Wright/UC Davis photo)

DAVIS, California -- A new UC Davis study predicts that climate change will irreversibly alter water circulation in Lake Tahoe, radically changing the conditions for plants and fish in the lake -- and it could happen in 10 years.

One likely result would be a warmer lake overall, with fewer cold-water native fish, and more invasive species, such as large-mouth bass, bluegill and carp.

Still unclear is how the changes would affect the lake's phenomenal clarity and cobalt-blue color, which have helped to make the Tahoe Basin an international vacation destination.

"What we expect is that deep mixing of Lake Tahoe's water layers will become less frequent, even non-existent, depleting the bottom waters of oxygen. This will result in major, permanent disruption to the entire lake food web," Schladow said.

"This is not unheard of," he continued. "Anoxia (oxygen depletion) occurs annually in most lakes and reservoirs in California in the summer. But Tahoe has always been special. It's been above and beyond such things.

"A permanently stratified Lake Tahoe becomes just like any other lake or pond. It is no longer this unique, effervescent jewel, the finest example of nature's grandeur."

Schladow said research is ongoing to determine if lowered global greenhouse-gas emissions would significantly slow the lake's decline, or even prevent it.

UC Davis researchers are in their 50th year of teasing apart the intertwining threads of biology, chemistry and physics that determine what Lake Tahoe looks like and what organisms live in it.

One of their chief objectives has been to understand the clarity-clouding effects of pollution from population growth and development, so that policymakers can devise solutions. Then, in December 2004, they reported that the lake was showing a new influence: Its water was warming up, probably because of global climate change.

The new study combined 40 years of weather data in the basin with mathematical models of global climate to create likely scenarios of future climate conditions at Lake Tahoe. Using those scenarios, the team employed a lake physics model to see how various combinations of probable air temperatures, cloudiness and wind speed would affect the mixing of water layers in the lake.

This mixing has profound ecological and water-quality impacts. Deep mixing moves nutrients from the lake bottom to the water surface, where they promote the growth of algae. And it takes oxygen from the surface and distributes it throughout the lake, which supports aquatic life.

The new study showed that, if global greenhouse-gas emissions continue at current levels, mixing could become less frequent and less deep -- even stop altogether as soon as 2019.

Schladow said that was quite a shock. "While we expected that the lake would mix less in the future, learning that we may be only a decade or two from the complete shutdown of deep mixing was very surprising.

"If mixing shuts down, then no new oxygen gets to the bottom of the lake, and creatures that need it, such as lake trout, will have a large part of their range excluded," Schladow said.

Equally worrying, he said, is the likelihood that when the oxygen is gone, phosphorus that is currently locked up in the lake-floor sediments will get released. This phosphorus will eventually reach the lake's surface, where it will fuel algal growth. Algae blooms can cause many problems, including reduced lake clarity, unpleasant odors and bad-tasting drinking water.

The climatic changes that are expected to affect Lake Tahoe are also impacting lakes around the world. These widespread concerns have been the topic of a science workshop at the Tahoe Environmental Research Center that runs through March 25. Researchers from Japan, New Zealand, Chile and the United States will discuss strategies to pool and analyze data from many of the lakes in the Pacific Rim region. Their goal is to learn more about the security of drinking-water supplies and the ecological sustainability of these lake systems.