Defiant Japan: Killing Whales Is the Only Effective Way to Study Them 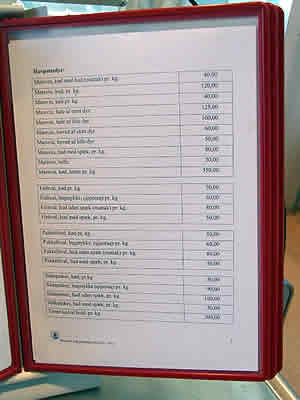 WILTSHIRE, UK -- The real reasons behind Denmark's pleas to increase the number of whales it needs to kill for native Greenlandic peoples have been exposed by Whale and Dolphin Conservation Society (WDCS).

Despite a ban on commercial whaling, the WDCS undercover investigation has revealed that Greenland (a Danish overseas territory) has been actively undermining the International Whaling Commission (IWC) ban on commercial whaling by selling whale meat, from whales it is allowed to kill solely for the nutritional needs of local aboriginal people, to tourists visiting the country.

WDCS investigators visiting Greenland documented restaurants and hotels deliberately targeting tourists by placing bowhead and other whale meat on their menus. The investigations also revealed supermarkets openly selling endangered fin whale and other whale meats, all freely available for visitors to the country to buy.

These revelations come on the eve of the annual meeting of the International Whaling Commission (the international body that regulates whaling) in Panama in July, where Denmark is set to ask that it be allowed to kill more whales in future years to meet the nutritional subsistence needs of the native population in Greenland.

However, the IWC requires that subsistence whaling should be for the 'purposes of local aboriginal consumption', not for the type of commercial sale that the investigation by WDCS has revealed.

At this year's IWC meeting , Denmark will argue that they want to take almost double the number of endangered fin whales (10 to 19) and increase the number of humpbacks they kill without a review for at least six years.

Denmark regularly claims that Greenland requires '670 tons' of whales meat to meet the 'needs' of its aboriginal peoples, yet this meat is clearly not needed by local people as it is being sold to tourists. Indeed, government-owned whale meat distribution companies have previously reported that it has been impossible to sell large amounts of the meat to the home market.

Butler-Stroud continues: "Who is this meat really for? Our investigation report shows that this demand for more whale meat is clearly driven by the commercial consumer market not by aboriginal needs. Greenland's native-born population has increased by around just 9.9% in the last 24 years and yet, the request for more large whales by Greenland in the same period has increased by 89%!" "Even the number of licensed subsistence hunters in Greenland has declined between 1993 and 2010 by a massive 49%."

There clearly isn't the level of subsistence 'need' in Greenland that both Greenland and the Danish government are trying make a case for.

"We believe that this, together with the findings of the WDCS investigation should result in any request for the killing of even higher numbers of whales by Greenland being rejected and the situation thoroughly reviewed by the IWC.

In addition to this investigation, WDCS partner, AWI (Animal Welfare Institute) completed a follow-on survey in June 2012, via telephone and email, of all restaurants for which contact information (phone/email) was available. The survey revealed that whale meat, including fin, bowhead and minke whale, was available to tourists at 24 out of 31 (77.4%) restaurants visited, contacted, and/or researched online in Greenland in 2011/2012.

WDCS is also warning any tourists that bringing whale meat bought in supermarkets in Greenland back into UK, EU or US is illegal and could result in a prison sentence.

Earlier in 2011, WDCS and AWI revealed Iceland was also openly selling whale meat packaged for export in the departure area at Keflavik airport to travellers who, if they made the purchase, risked arrest for importing an internationally protected species.