Scientists: Prehistoric Fish had Bite Stronger than a T-rex; 'Able to Devour Anything' 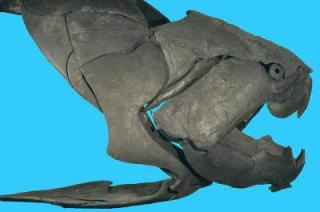 A photograph of the Dunkleosteus terrelli fossil skull upon which this study was based.

CHICAGO, Illinois -- It could bite a shark in two. It might have been the first “king of the beasts.” And it could teach scientists a lot about humans, because it is in the sister group of all jawed vertebrates.

Dunkleosteus terrelli lived 400 million years ago, grew up to 33 feet long and weighed up to four tons. Scientist have known for years that it was a dominant predator, but new research to be published in the Royal Society journal Biology Letters on November 29 reveals that the force of this predator’s bite was remarkably powerful: 11,000 pounds. The bladed dentition focused the bite force into a small area, the fang tip, at an incredible force of 80,000 pounds per square inch.

Even more surprising is the fact that this fish could also open its mouth very quickly—in just one fiftieth of a second—which created a strong suction force, pulling fast prey into its mouth. Usually a fish has either a powerful bite or a fast bite, but not both.

“The most interesting part of this work for me was discovering that this heavily armored fish was both fast during jaw opening and quite powerful during jaw closing,” said Mark Westneat, Curator of Fishes at The Field Museum and co-author of the paper. “This is possible due to the unique engineering design of its skull and different muscles used for opening and closing. And it made this fish into one of the first true apex predators seen in the vertebrate fossil record.” This formidable fish was a placoderms, a diverse group of armored fishes that dominated aquatic ecosystems during the Devonian, from 415 million to 360 million years ago. Dunkleosteus’ bladed jaws suggest that it was among the first vertebrates to use rapid mouth opening and a powerful bite to capture and fragment evasive prey prior to ingestion.

To determine the bite force, scientists used the fossilized skull of a Dunkleosteus terrelli to recreate the musculature of the ancient fish. This biomechanical model showed the jaw’s force and motion, and revealed a highly kinetic skull driven by a unique mechanism based on four rotational joints working in harmony. The extinct fish had the strongest bite of any fish ever, and one of the strongest bites of any animal, rivaling the bites of large alligators and Tyrannosaurus rex.

Thus Dunkleosteus was able to feast on armored aquatic animals that also lived during the Devonian, including sharks, arthropods, ammonoids, and others protected by cuticle, calcium carbonate, or dermal bone.

“Dunkleosteus was able to devour anything in its environment,” said Philip Anderson, at the Department of Geophysical Sciences at the University of Chicago and lead author of the research. The bladed jaws, capable of ripping apart prey larger than its own mouth, is a feature sharks didn’t develop until 100 million years later.

“Overall, this study shows how useful mechanical engineering theory can be in studying the behavior of fossil animals,” he added. “We cannot actually watch these animals feed or interact, but we can understand the range of possible behaviors by examining how the preserved parts are shaped and connected to each other.”