Survey: Haiti's Coral Reefs Most Overfished In The World; 'No Food Fish Of Reproductive Age' 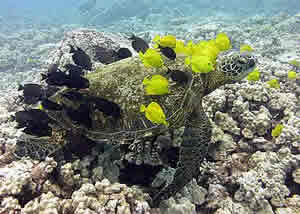 CORVALLIS, Oregon -- One of the first set of studies to examine what tourists and recreation enthusiasts actually think about coral reef ecosystems suggests they are a rare exception to controversies over human use versus environmental conservation – their stunning beauty is so extraordinary that almost everyone wants them protected in perpetuity.

That core belief is often strong enough that if it means people have to be kept out, so be it.

The analysis, done in Hawaii by researchers from Oregon State University and the University of Hawaii, found that most people visiting the state's coral reef ecosystems care deeply about these areas and very much enjoy visiting them, but will generally endorse whatever amount of management is needed to protect them.

"It was really quite astonishing, almost shocking how much people wanted this resource protected for its own sake," said Mark Needham, an assistant professor of forest ecosystems and society at OSU. "We fish and hunt wildlife for food or sport, we cut trees for timber. In most natural resource issues, we find conflicts over management for economic value versus environmental preservation or protection, but we really didn't see that here.

"Our surveys found overwhelmingly that people visiting coral reef areas did not think that human use and access were the most important issues when it came to these areas," he said. "And if anything was to have a deleterious effect on reef ecosystems, they would want it stopped."

That attitude was also of interest, Needham said, because in Hawaii coral reef ecosystems are a major draw for the tourism industry – seven million people a year who spend more than $11 billion, in part, to enjoy the glistening waters, multi-colored corals, and myriad tropical fish. They are a destination for everyone from snorkelers and scuba divers to tourists in glass-bottom boats and toddlers wading knee-deep, all who come to see the incredible diversity of marine life. More than 80 percent of Hawaii's visitors recreate in the state's coastal and marine areas, and a majority go snorkeling or diving.

Past research has been done in many places around the world to analyze physical damage or other pressures placed on coral reefs, which in some cases has resulted in steps to reduce human use or educate visitors on reef protection. But until now, resource managers had no real barometer on just how much public support there was for such measures, especially among hobbyists and tourists who use this resource.

These recent surveys obtained attitudes and opinions from more than 3,500 residents and tourists visiting seven coral reef sites in the Hawaiian Islands, including state marine protected areas, fisheries management areas, and a county beach park. The surveys also measured attitudes about overuse and crowding, and opinions about management needs.

Opinions about coral reefs varied, Needham said, but were mostly just variations on how much protection might be needed, with some people feeling more extreme than others. Virtually no one wanted expanded use of coral reefs to the extent it might degrade them for enjoyment by future generations, and many were willing to endorse any level of protection needed, even if it meant banning human use. These views toward coral reefs reflected peoples' core personal values and are unlikely to change much, scientists said.

The studies showed that acceptance of potential future management strategies would be driven largely by perceived health of coral reefs and changes to these ecosystems.

"Litter, facilities, and crowding were not as important as coral reef conditions in influencing support or opposition to management actions such as limiting human use and increasing public information," Needham said. "This is surprising because in many parks and protected areas on land, social issues such as crowding and litter heavily influence attitudes toward management.

"In a marine context," he added, "it appears that environmental conditions may be more important."

More education and interpretation was commonly sought to help address issues of concern, such as people damaging corals by standing on them, the report found. The studies were supported by the Hawaii Coral Reef Initiative and State of Hawaii Division of Aquatic Resources. Some results of this work have been accepted for publication in professional journals.

This research should be considered good news for managers seeking support for their marine protection and conservation efforts, Needham said.

However, further studies are needed in other states and countries and with other segments of the public, he said, including some that have a much stronger orientation toward managed use instead of recreation or environmental protection. Needham is now working with Brian Szuster, an assistant professor of geography at the University of Hawaii, to examine this topic in other areas of Hawaii and in other countries.