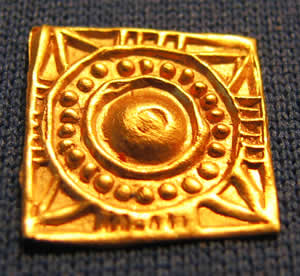 KEY WEST, Florida -- The crew of Keith Webb’s Blue Water Ventures Key West, joint-venture partners of Mel Fishers Treasures, have discovered the first gold treasure of the 2009 search and recovery season, a gold “flowerette” of jewelry, and an intriguing square of decorative hammered gold, wafer-thin, no more than 1/2 inch in diameter.

Examples of such hammered and chased gold jewelry, insignia and regalia, which were produced by professional goldsmiths, can be found in collections of Asian and African artifacts. Their designs were often meant to represent familiar proverbs or maxims, which may explain the design motif and irregular sequence of raised lines on the outer perimeter of the artifact.

Because the Santa Margarita was battered and broken apart in the hurricane of 1622, its cargo was distributed over an extensive area and now lies scattered and hidden. It is known from archival records that over 800 ounces of registered gold, 145 silver bars weighing between 80 and 100 pounds each, and more than 80,000 silver coins from the Santa Margarita still await discovery.

BWVKW Operations Director and boat Captain Dan Porter said that the success of this first trip of the new season is the result of months of methodical review and planning with company President/CEO Keith Webb. Webb says anticipation for the new season is high because the new 2009 salvage plan has the team working in an area that has seen little exploration in the past.

Porter adds that diver Van Houten, who also discovered the gold flowerette, has “earned his golden hat” – a gold colored Blue Water Ventures team hat that is presented to crew members who find gold, and that he has a stack of such hats on hand for the season ahead.