NOAA: White Marlin Not Threatened Nor Endangered; Population To Remain 'Stable Or Continue To Increase' 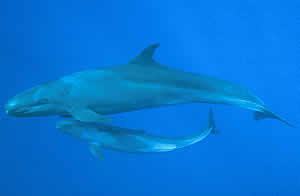 SILVER SPRING, Maryland -- In response to a petition, NOAA's Fisheries Service will recommend that the Hawaiian insular false killer whale be listed as endangered under the Endangered Species Act, to prevent the current population of less than 170 whales from going extinct.

Although the size of the population before 1989 is unknown, scientists estimate that the population has been in decline for at least the last few decades. Also, only approximately 46 of the whales are capable of breeding. Animals' offspring can be prone to genetic defects when their breeding population size falls to about 50 individuals. The insular population range extends 87 miles from the main Hawaiian Islands, with its core in the area from shore to 25 miles.

In taking this action, NOAA's Fisheries Service reviewed the extinction risk of this distinct population segment, the factors for decline and efforts being made to conserve the species. The analysis identified 29 threats to the species' survival, such as their small numbers as well as hooking and entanglement of false killer whales in fisheries. Given the identified threats to the population and the results of quantitative and qualitative risk analyses, NOAA's Fisheries Service believes that Hawaiian insular false killer whales are at high risk of extinction as a result of either small scale incremental impacts over time or a single catastrophic event. The status review, which presents the science upon which the proposed listing is based, has undergone an external peer review.

Species listed as endangered receive broad protection under the ESA, including a prohibition against "take'" defined to include harassing, harming, pursuing, wounding, killing, trapping, capturing, or collecting. Federal agencies are required to evaluate the potential effects of their activities on ESA protected species, and must consult with NOAA's Fisheries Service or the Fish & Wildlife Service, as appropriate, on any actions that may adversely affect protected species or destroy or adversely modify the species' designated critical habitat. In addition, any "take" of listed species may result in criminal and civil penalties

The false killer whale, a large, slender whale that is usually black or dark gray in color, is found in all tropical and warm-temperate oceans; generally in deep offshore waters. They are top predators and eat fish and squid primarily. NOAA's Fisheries Service received a petition for listing the insular false killer whale as endangered on Oct. 1, 2009 from the Natural Resources Defense Council.

In January, a take reduction team, with members from the Hawaii longline fishing community, conservation organizations, researchers and government agencies, reached consensus agreement on a draft plan intended to reduce false killer whale interactions in the Hawaii-based longline fleet. Their recommendations included gear modifications, disentanglement training for the captain and crew and the establishment of a year round Northern exclusion zone. NOAA's Fisheries Service is currently evaluating the draft plan and will soon publish the plan, any proposed changes, and a proposed rule for public comment in the Federal Register.

To submit comments on the false killer whale proposed listing (0648-XT37), use any of the following methods:

Submit comments online via the Federal eRulemaking Portal at http://www.regulations.gov.