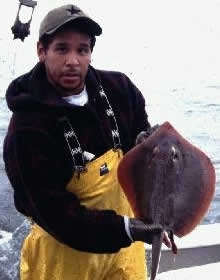 SARASOTA, Florida -- Mote shark scientist, Dr. Jim Gelsleichter, who is catching, tagging and releasing juvenile bull sharks in the Caloosahatchee River near downtown Fort Myers to determine whether they have been exposed to drugs excreted by humans, released some early findings of his work based on animals tested in 2006.

Pharmaceuticals are introduced into coastal ecosystems mainly by excretion from human users and transport in wastewater discharge. There has been no widespread survey for these drugs in coastal systems in the U.S., so little is known about how drugs in estuaries affect the animals that live in them. Many drugs function by altering biological processes common in humans and animals, so it’s important to determine exposure levels and the affects this may have on how these animals develop.

The results, released during the annual meeting of the American Elasmobranch Society in St. Louis, analyzed samples taken from 10 bull sharks to check the levels of estrogen from birth control pills as well as anti-depressants.

While this small sample did not show evidence of estrogens in the sharks, it did indicate the presence of low levels of some anti-depressants in sharks that were only 2 to 3 weeks old, Gelsleichter said. “I need to stress that these are really early preliminary results and that the sample size was very small, but the results are interesting nonetheless,” he said. “Data from this year’s field work will include samples of older sharks and we’re hoping that we will be able to draw more conclusions by having more sharks in the study.”

The study is funded by the Charlotte Harbor National Estuary Program and is being conducted in conjunction with Dr. Nancy Szabo of the University of Florida ’s Analytical Toxicology Core Laboratory.

Anglers can also help the research. Those who frequent the Caloosahatchee River and catch bull sharks bearing Mote’s unique tags are asked to remove the entire tag from the animal by clipping it off as close to the base as possible, storing it in a standard freezer in aluminum foil or a clean plastic bag and contacting Mote’s Center for Shark Research at 941-388-4441, Extension 576