Research: Piddling Fish Face Off Threat Of Competition; 'touching The Tip Of The Urinary Pheromone Iceberg!' 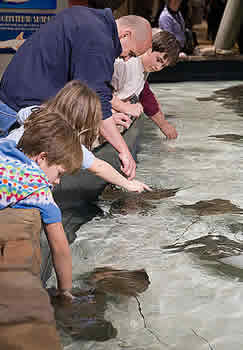 NEW BRUNSWICK, New Jersey -- When's the last time you visited an aquarium that had a touching exhibit? Touching exhibits let guests to use their own hands to touch sharks, sting rays, starfish, and many other small aquatic animals and bring knowledge about the importance of all animals in an ecosystem, not just our pets at home. But are these aquatic animals being treated fairly and safely by the guests who visit these touching exhibits? If not, we can all do something to make this issue better.

Touching exhibits, such as the one in Adventure Aquarium in Camden, New Jersey, have delicate and fragile aquatic species being mishandled, grabbed out of the water, and poked at. All of these issues can cause serious harm to the aquatic animals in the exhibit and to the visitors themselves that do these kinds of things. These aquatic animals are not our pets but wild animals that cannot be tamed or handled excessively by humans.

We can start fixing this problem by a number of different methods. One method includes using a rubber band that binds your thumb, pinky, and ring finger together. The rubber band would cause your thumb to curl inwards toward the palm of your hand and the other two fingers to slightly curl on top of the thumb making all three fingers incapable of being used and most importantly hinders your ability to grab and pull on the aquatic animals. Other methods include using psychological methods to persuade or cue people's perceptions and thoughts on listening to instructions and respecting the animals so that this issue does not occur. For example, posters or videos that use subliminal techniques and images like the "bandwagon" technique are very useful. The aquarium employees could all demonstrate using two fingers before allowing the guests to touch the animals thus causing the guests to be more likely to using their own two fingers while they touch the aquatic animals. We should fix this problem before a serious or fatal injury happens to any of these animals or to the guests themselves.

There are successful examples where touching exhibits limit the amount of negative interactions between animals and people. The National Aquarium in Baltimore allows for a limited amount of people to enter the touching exhibit thus allowing for the aquarium employees to be able to watch and monitor all of the guests closer. Also, in smaller groups, people tend to listen to instructions more and the psychological effect of the distribution of responsibility (this means people in large crowds expect other people to carry the burden of responsibility and feel they have leeway to break the rules as they please) amongst people in a large crowd is extinct. Furthermore, employees can teach and explain interesting facts about the aquatic animals to small groups within the touching exhibit which brings a greater sense of respect and care for the animals.

In conclusion, the problem faced by aquariums and zoos that contain touching exhibits is a great way to experience wild animals and to educate people on the importance of all animals in the ecosystem. Problems are faced by these zoos and aquariums to make sure no animal or person gets injured in the process and it is everyone's responsibility to ensure that all the rules and regulations are followed properly. If not now, then when?

Huseiyin Dogu is a senior at Rutgers University majoring in biochemistry.