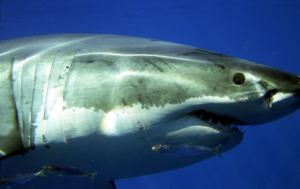 In a surprising move, the Mexican government has recently published sweeping new regulations and protections for sharks, including a shark finning ban, an extension of the moratorium on new commercial shark fishing permits, and extensive protections for great white sharks, whale sharks, basking sharks and manta rays.

Patrick Douglas, CEO of Shark Diver, a commercial white shark cage diving company operating out of San Diego, welcomed the move. “Mexico has taken a real leadership position here” says Douglas. "The rest of Latin America is watching what Mexico does with great interest now. This is good news indeed”.

In the past few years, Mexico has been recognized as one of the few places on the planet where large congregations of Great White sharks appear each year at Isla Guadalupe. Along with Whale shark aggregations in Holbox, destination tourism with these shark species and others is growing.

Captain Mike Lever owner of expedition dive vessel MV Nautilus Explorer was thrilled with the news “The people of Mexico afford us a great privilege in allowing us to dive with the white sharks at Guadalupe Island. The enactment of Mexican rules for responsible shark and ray fisheries is incredibly good news and really bodes well for the survival of these magnificent animals. Our hats are off to all of the scientists who helped make this happen”.

The new rules and regulations came after 10 years of debate and the broad support of researchers, scientists, conservations groups, eco-tour operations and local citizens.