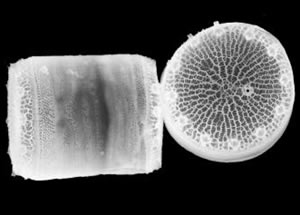 Thalassiosira pseudonana -- with a hard outer shell of silica shaped like a hatbox and marked with pores -- is 3 to 4 microns in size. Credit: U of W

SEATTLE, Washington -- Diatoms – some of which are so tiny that 30 can fit across the width of a human hair – are so numerous that they are among the key organisms taking the greenhouse gas carbon dioxide out of the Earth’s atmosphere.

The shells of diatoms are so heavy that when they die in the oceans they typically sink to watery graves on the seafloor, taking carbon out of the surface waters and locking it into sediments below.

This week in the online edition of the Proceedings of the National Academy of Sciences scientists report the discovery of whole subsets of genes and proteins that govern how one species of diatom builds its shell. For oceanographers, the work might one day help them understand how thousands of different kinds of diatoms – and their ability to remove carbon dioxide from the atmosphere – might be affected by something like global climate change. Material scientists involved in the work are interested in the possibilities of manipulating the genes responsible for silica production as a way of fabricating more efficient computer chips.

Diatoms, most of which are far too tiny to see without magnification, are incredibly important in the global carbon cycle, says Thomas Mock, a University of Washington postdoctoral researcher in oceanography and lead author of the paper. During photosynthesis, diatoms turn carbon dioxide into organic carbon and, in the process, generate oxygen. They are responsible for 40 percent of the organic carbon produced in the world’s oceans each year.

The new work took advantage of the genomic map of the diatom Thalassiosira pseudonana published in 2004 by a team led by UW oceanography professor Virginia Armbrust, who is corresponding author of this week’s PNAS paper. Thalassiosira pseudonana is encased in a hatbox-shaped shell comprised of a rigid cell wall, made mainly of silica and delicately marked with pores in patterns distinctive enough for scientists to tell it from other diatoms.

Armed with the genomic map, the researchers changed environmental conditions in laboratory cultures of Thalassiosira pseudonana, for example limiting the amount of silicon and changing the temperatures. Then researchers used what’s called “whole genome expression profiling” to determine which parts of the genome were triggered to compensate.

Think of a plant on a windowsill that starts getting a lot more sunlight, Mock says. The new set of conditions will cause genes in the plant to turn on and off to help the plant acclimate to the increased light as best it can.

Scientists since the late 1990s have found only a handful of genes that influence diatom shell formation. The work with Thalassiosira pseudonana identified large, previously unknown subsets. A set of 75 genes, for example, was triggered to compensate when silicon was limited.

The researchers were surprised to find another subset of 84 genes triggered when either silicon or iron were limited, suggesting that these two pathways were somehow linked. Under low-iron conditions, the diatoms grew more slowly and genes involved in the production of the silica shell were triggered. Individual diatoms also tended to clump together under those conditions, making them even heavier and more likely to sink.

The response of thin and thick cell walls depending on the amount of iron available had been observed at sea but “no one had a clue about the molecular basis,” Mock says.

Considering that 30 percent of the world’s oceans are iron-poor, some scientists have suggested fertilizing such areas with iron so diatoms become more numerous and absorb more carbon dioxide from the atmosphere, thus putting the brakes on global warming. If, however, adding iron causes diatoms to change the thickness of their shells then perhaps they won’t be as likely to sink and instead would remain in the upper ocean where the carbon they contain might be released back to the atmosphere as they decay or are eaten.

“Iron increases primary production by diatoms but our study adds another concern about the efficiency of iron fertilization,” Mock says.

Along with helping scientists understand implications for climate change and absorption of carbon dioxide, diatoms can manipulate silica in ways that engineers can only dream about.

University of Wisconsin professor Michael Sussman, the co-corresponding author on the paper, says the new findings will help his group start manipulating the genes responsible for silica production and potentially harness them to produce lines on computer chips. This could vastly increase chip speed because diatoms are capable of producing lines much smaller than current technology allows, he says.