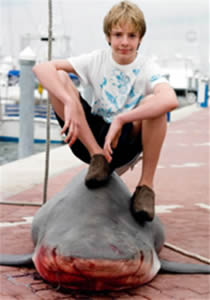 PALM BEACH, Florida -- After half a day at sea, a 12-year-old boy caught a bull shark weighing more than the state record for a catch of the coastal fish.

The state record, set in 1981, was a 517-pound capture at Panama City Beach, according to the state Fish and Wildlife Conservation Commission.

Aidan had set out early on the Thumper from Sailfish Marina in Palm Beach Shores, intent on catching anything at all. Aidan, who weighs 120 pounds, reeled in the fish on his own, first mate Roy Rice said.

"This thing was huge," said Aidan, who has been casting lines since age 5.

It was long, too: 9.58 feet. Bull sharks rarely grow past 9 feet, according to the National Oceanic and Atmospheric Administration.

The shark put up a strong fight. After 20 minutes of muscling the line, Aidan lost feeling in his body, he said. "When you have a shark on the line it's completely painful."

Aidan, a seventh-grader at Eagle Hill School in Connecticut, was in Palm Beach this week with family who have an apartment there. His mother, Maureen Murray, said her son wants to be a marine biologist.

This wasn't the first time he caught a shark. A year ago, he reeled in a 461-pound one, his mother said.

"Of course, I'm happy. I'm proud," she said. "It's not really surprising to me. I'm still pretty happy."

He plans to have the bull shark mounted.

Florida prohibits anglers from keeping several other species of shark, forcing anglers to return them to the sea. Sharks, unlike other fish, are slow to reproduce.

Aidan's family plans to enter his catch for the new state record.