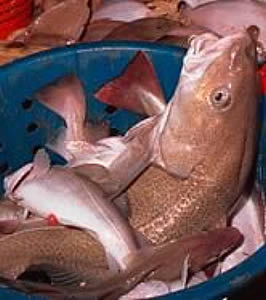 Cod bycatch was at least 70 per cent higher than target levels on the southern Grand Banks near Canada. Â© WWF-Canon / Mike R. JACKSON

HALIFAX, Nova Scotia -- Cod bycatch was at least 70 per cent higher than target levels on the southern Grand Banks near Canada, holding back recovery of one of the world’s best known fisheries following its spectacular collapse and closure in the early 1990s.

Information provided to WWF-Canada also said that European Union boats were responsible for the largest proportion of the overrun in bycatch.

Excessive bycatch of cod has undermined a moratorium imposed in 1994, peaking in 2003, when bycatch amounts were estimated to be over 80 per cent of the remaining cod stock. WWF pushed for a 2008 cod recovery strategy that included setting a bycatch reduction target of 40 per cent for southern Grand Banks cod at the September 2007 annual meeting of the Northwest Atlantic Fisheries Organization (NAFO).

The 40 per cent target was equivalent to a fishing mortality of 420 tonnes, estimated to be the maximum the population could withstand to still have some chance of recovery. Unofficial 2008 fishing year statistics however show a total of 713 tonnes of bycatch, with EU boats taking 444 tonnes – with these figures taking no account of what is believed to be considerable amounts of misreporting and illegal fishing.

Before the results of the 2008 fishing year became available, NAFO stated in a press release that they had “adopted a resolution to implement its commitment to an ecosystem-based fisheries management approach”, an approach contradicted by NAFO increasing the total allowable catches (TACs) for fisheries with high levels of cod bycatch. Evidence of an increase in young cod in the population was also ignored.

“Cod and other fish stocks can never recover as long as NAFO refuses to see the urgency of the bycatch problem and acknowledge that voluntary measures are not working,” said Dr. Robert Rangeley, Vice President Atlantic, WWF-Canada. “If NAFO’s Scientific Council starts working on solutions at their June meeting then it will be the responsibility of the Fisheries Commission, in September, to impose strict management measures that will give cod recovery a chance.”

WWF is now calling on NAFO to take steps that will benefit the ecosystem health and the fisheries of the Grand Banks. This is entirely consistent with the Ecosystem management approach adopted in the newly revised NAFO Convention.

Measures should include the adoption of an effective recovery plan for southern Grand Banks cod that sets long-term recovery goals, immediate bycatch reduction targets, gear-based solutions and closures to protect spawning and nursery areas. The adopted measures will need to be backed by monitoring and enforcement, to be effective.

Defining and Estimating Global Marine Fisheries Bycatch, a paper co-authored by WWF for the journal Marine Policy, recently estimated that global bycatch – defined as unused and unmanaged catch – constitutes more than 40 per cent of the global reported catch.