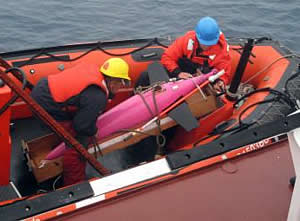 Researchers move the Seaglider that was retrieved from the Pacific Ocean. Credit: Pacific Marine Environmental Laboratory/NOAA

SEATTLE, Washington -- A University of Washington Seaglider operated for 9 months and 5 days in the Pacific Ocean, an endurance record more than double what any other autonomous underwater vehicle has accomplished on a single mission.

During that time it propelled itself 3,050 miles (more than 4,900 kilometers) through the water of the Northeast Pacific racking up a distance equivalent to crossing the Atlantic Ocean from New England to Europe. Records set include time at sea and distance traveled under its own power.

"Operating endurance is about how far a glider propels itself – as opposed to drifting with currents – and how often dives are made to collect oceanographic data," says Charles Eriksen, University of Washington professor of oceanography. "And the Seaglider was truly autonomous the entire time."

Sleek, torpedo-shaped Seagliders, developed jointly at the UW School of Oceanography and Applied Physics Laboratory, have navigated thousands of miles across powerful boundary currents and through eddies in the roughest of seas, Eriksen says. A Seaglider moves without using propellers. Instead to dive, it deflates a buoyant swim bladder to make itself sink and pitches its nose down by shifting its battery pack toward the nose end. Wings make it glide at an angle rather than sink straight down. After diving the battery pack is moved toward the rear, raising the nose, while fluid is pumped into the swim bladder making the Seaglider buoyant so it rises at an angle toward the surface.

Once there a Seaglider is programmed to use its satellite phone to relay data, perhaps receive new instructions and then dive again.

The record breaking mission occurred in the Gulf of Alaska about 900 miles west of Vancouver, British Columbia. The 9-month, 5-day endurance record doesn't include an additional 10 days the Seaglider drifted waiting to be picked up by a ship this summer. Despite being so long at sea, biological fouling was minimal – that is, there was little growth of barnacles, algae and other microorganisms and plants on the Seaglider's surface so it continued to glide efficiently.

While it was at work, it made 737 dives down to a depth of 3,280 feet (1 kilometer) as it repeated a track designed to compliment data being gathered by a mooring. A glider traveling along the surface would have covered 2,900 miles (4,680 kilometers), but because of the Seaglider's slanting dives it actually propelled itself through 3,050 miles (4,900 kilometers) of water. It's like two swimmers in a pool, one who swims along the surface and one who swims down at an angle to touch the bottom of the pool in the middle, then angles up to the other end. Both have traveled the same distance but one swimmer clearly swam farther through the water.

A UW Seaglider held the previous endurance record for an autonomous underwater vehicle having operated for seven months and seven days.

Eriksen's group was able to advance the open-ocean record by making the Seaglider body lighter so it could carry more batteries. In collaboration with the Applied Physics Laboratory they also installed more powerful batteries. One unexpected drain on battery power occurred because random ocean sound triggered the part of the Seaglider that sends out an acoustic ping in response to a signal from a ship that is trying to locate it in the ocean. No ship was searching for it but the Seaglider slavishly sent out a spurious ping on average every 30 seconds for 9 months, sapping more than 14 percent of the battery power. Without the errant pinging, a problem now fixed, an even longer deployment should be possible, Eriksen says.

Sensors and instruments on Seagliders record temperature, salinity, dissolved oxygen and bio-optical characteristics of the water that help scientists understand changing ocean conditions. During the Gulf of Alaska mission, for example, the record-breaking Seaglider added to the 50-year ship-sampling record started by Canadian scientists to learn more about the major current that comes across the Pacific and splits into two key North American currents, the Alaska current running north and the California current south. Gliders are good companions for sampling done from ships, by drifters carrying packages of instruments that drift with the currents and moorings where instruments are tethered to the seafloor. For instance, a 226-foot research vessel attempting to work in the area of the record-breaking Seaglider last February had to limit its operation because of high seas. The glider kept right on working through that and dozens of other severe storms, Eriksen says.