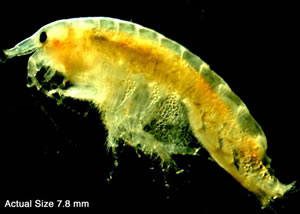 The quick decline of a tiny shrimp-like species, known scientifically as Diporeia, is being blamed on the invasive quagga mussel. credit NOAA. 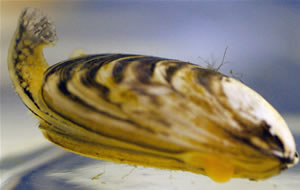 The quick decline of a tiny shrimp-like species, known scientifically as Diporeia, is related to the aggressive population growth of non-native quagga mussels in the Great Lakes, say NOAA scientists. As invasive mussel numbers increase, food sources for Diporeia and many aquatic species have steadily and unilaterally declined.

A recent research study from NOAA’s Great Lakes Environmental Laboratory published this week in Freshwater Biology documents the recent decline of Diporeia and the explosive growth of quagga mussels in Lake Michigan. Over the past five years quagga mussels have displaced native Diporeia as the dominant bottom dwelling organism, leading to a major disruption in the lake’s food web.

Scientists at the NOAA Great Lakes lab project that impacts on fish populations will continue and become more pronounced as quagga mussels further spread to all depths occupied by the dwindling Diporeia. It is estimated that the mass of quagga mussels in the lake is now about four times the mass of all prey fish.

In Lake Michigan, declines in Diporeia masses were first observed in the early 1990s soon after the discovery of invasive mussels in the Great Lakes. By 2005, lake populations of the tiny shrimp decreased 96 percent in the 10-year period of the study, with further observations indicating recovery of Diporeia improbable once it has disappeared.