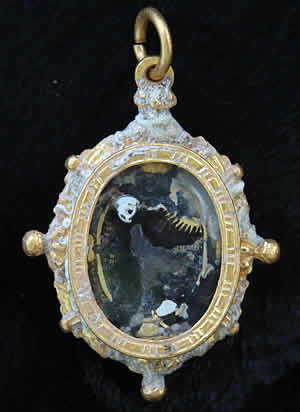 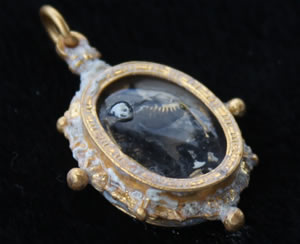 Captain Dan Porter and dive partner Bobby Hartwell were working at a depth of about 20 feet, in an area where Porter and his crew had already uncovered 17th century ceramic pieces, a musket ball, and a scattering of large ballast stones. Weather conditions had deteriorated throughout the day and by afternoon “were so rough that the current was running straight up the boat’s stern and had exerted enough force to break the vessels bow line,” said Porter. About to call it a day for safety reasons, Porter said that he was giving the excavation one last pass with his metal detector when he got a strong “hit.” Carefully hand fanning the spot, he stopped in mid-stroke at the sight of a flash of gold. Another gentle fan to clear away the sand revealed a magnificent, fully intact religious reliquary, made of heavy, richly colored high karat gold, set with an oval of clear material, possibly rock crystal, providing a window into a recessed interior.

The recessed compartment would have been to hold a religious relic – which is the purpose of a reliquary. Examples of such relics might be the physical remains of a Saint or some other object of devotion.

Within the compartment of the Santa Margarita reliquary is what appears to be very thin gold foiling with markings and other as-yet unidentified fragments. The reliquary measures 1 Â½ inches tall, 1 inch wide, 3/8 inch deep, and has a 3/8 inch ring-link for a chain.

Blue Water Ventures, a joint-venture partner of Mel Fisher’s Treasures, began their efforts to locate the rich remains of the galleon Santa Margarita in 2005. Because the vessel was battered and broken apart in the hurricane of 1622, its cargo was distributed over an extensive area and now lies scattered and hidden. It is known from the original ships manifest that over 800 ounces of registered gold, 145 silver bars weighing between 80 and 100 pounds each, and more than 80,000 silver coins from the Santa Margarita still await discovery. Personal possessions such as the gold reliquary and the exquisite gold chalice and gold toothpick/earwax spoon discovered on the scatter trail last season would not have been listed on the ships manifest, but substantially increase the value and importance of the cargo.

Porter and his crew returned to port today with the reliquary and two other significant historic artifacts—a pair of heavily encrusted arquebus—early muzzle-loaded firearms. The team intends to re-supply the Blue Water Rose with fuel and groceries and return to exploring the area that BWVKW CEO Keith Webb says is “the furthest west an artifact of the caliber of the gold reliquary has been found.” He adds, “The amount of previously unexplored seafloor in this area is extensive.”